David Byrne Calls Out U2! 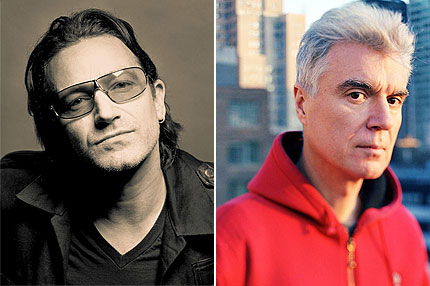 Bono and David Byrne might not be shaking hands the next time they meet at that magical exclusive place where rock stars go to hang out.

Writing on his blog recently, the ex-Talking Heads frontman crankily called out the Irish megastar.

With what seems to be at least half-a-tongue planted in his cheek, Byrne wrote that U2’s “$40 million stage” and estimated “200 semi trucks crisscrossing Europe” is “overkill” and “looks a wee bit out of balance given all the starving people in Africa and all.”

Byrne’s obvious sarcasm aside, this is not the first criticism of U2’s world tour behind their latest album, No Line On the Horizon. Earlier this year, an article in the UK’s Guardian explained that, according to an environmental group, “the band’s 44 concert dates this year have the equivalent carbon footprint of a return flight to Mars.” In the same story, environmental consultant Helen Roberts said the band would “need to plant 20,118 trees a year” to offset the tour’s carbon footprint.

Though they have yet to respond, Bono and the lads probably know that actions speak louder than words. Back in March, the band announced they were donating an estimated nine million pounds (roughly $13 million dollars) to charity. In 2008, Bono’s RED charity auction raised $42 million to fight AIDS in Africa. Then there’s his work for Third World debt relief.”

Surely there are better targets than Bono for this kind of criticism, no?