Exene Cervenka will continue touring and recording, despite suffering from multiple sclerosis. Click here for more. 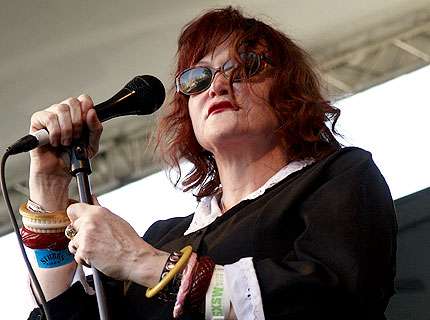 Exene Cervenka, co-vocalist for long-running Los Angeles punk band X alongside bassist/singer John Doe, has been diagnosed with multiple sclerosis, a disease that affects the body’s central nervous system and can result in physical disability.

“After some months of not feeling 100 percent healthy, I recently had some medical tests run and the prognosis is that I am suffering from multiple sclerosis. Apparently, it has been affecting me for quite some time. Although this is obviously unfortunate news, I am choosing to see the positive in it. I, and X as a band, have supported the Sweet Relief charity since the mid-1990’s; the irony of this is not lost on any of us. Sweet Relief was started as an aide to uninsured artists by musician Victoria Williams when she herself was diagnosed with MS in 1992.

“While this diagnosis will most certainly mean some changes for me, personally, it will not affect my commitments to the current X U.S. tour, nor will it affect my solo album that is slated for release this fall on Bloodshot Records. My focus will certainly be on maintaining my health –many people remain strong and continue to live their lives as productively as they had before an MS diagnosis and I plan to be one of those people.”

X’s next show is at Philadelphia’s World Café Live June 4.