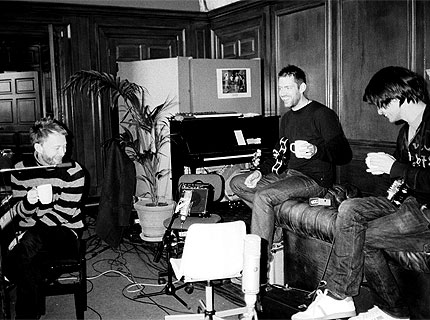 Despite wrapping their world tour in March, Radiohead have already returned to the studio to begin recording their new album!

Bassist Colin Greenwood told BBC News about the sessions for the band’s follow-up to 2007’s In Rainbows: “We just went in last week. It was really good. It was really noisy and chaotic and really fun.

“We’re at the stage where we’ve got the big Lego box out and we’ve tipped it out on the floor and we’re looking at all the bits and thinking, ‘What next?'”

Handling production duties is Nigel Godrich, who has manned the boards on every Radiohead record since their 1997 landmark OK Computer. “He’s brilliant,” Greenwood told NME.com. “He can make everything sound like it’s working together, rather than us trying to kill each other.”

Will the band repeat the pay-what-you-want release method that they employed for In Rainbows?Time will tell, says Greenwood: “We’ve got lots of ideas but we don’t decide what we’re going to do until we’ve finished the thing. It’s all up in the air, but it was up in the air last time.”

Recording new songs isn’t all that the boys have been up to lately — frontman Thom Yorke recently advocated for climate change on the band’s Dead Air Space blog, urging U.S. citizens to sign a petition that could result in a bill regulating global warming.