“Let’s start a charitable organization to save Blockbuster before it goes extinct,” Regina Spektor says excitedly. “We can make this sweet, sentimental documentary, in which people are constantly falling in love in Blockbuster.”

This is where a conversation with Spektor about her new album, Far (out June 23), has led. The 29-year-old singer-songwriter’s 2006 breakthrough hit “Fidelity” is quirky, heartfelt, and spontaneous. And, as we are quickly discovering, so is her conversational style.

Spektor, who moved from Russia to New York City with her family when she was nine years old, is hard to characterize. The music on Far, her fifth studio album, shifts from spare solo piano to soaring orchestral movements featuring strings, electric guitar, and snazzy studio embellishments. Lyrically, her characters dance from a beach party to an existential conversation with God in a heartbeat. At one point, Spektor even barks like a dolphin.

To get the scoop on the album, which employed four producers, including ELO’s Jeff Lynne, we gave Spektor a call — and apparently she was having some trouble with her head. 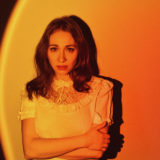 What’s going on, where are you right now?
Hiya, I’m in New York and I feel like my brain is melting. Today started f–king early! Damn! I was mastering the new album, so I flew in from Maine. I had to wake up at 5 A.M.!

Yikes! I heard your new record, Far. It’s different! It’s upbeat and it’s sad! It’s more produced! For you, what’s the most noticeable departure?
It seems my previous records started with a story, a little world that was created just in the lyrics. But now the actual sound, the feeling of the soundscape and the production of the songs really differs. It’s not just the lyrics and the story that makes it feel like a different world — it’s the sound.

One of my favorite songs is “Blue Lips,” a slow building tune with lyrics about all things blue. Can you tell me what that song is about?
Well, that’s really hard for me. I don’t really think of songs in those terms. I don’t sit down with an agenda and go, “I’m going to write a song about…” you know? I just start playing a little bit on the piano, and then I start singing a little bit, and then it’s over — and there’s a song. Sometimes, very rarely, I can trace the ancestry of a lyric, and I’ll be like, “Oh, it’s a combination of that person I saw in the street and that one painting I saw in a museum, and that one movie I saw,” or something like that. But for the most part, it’s not really clear even to me. People think that if you can’t explain a linear meaning, then the song’s meaningless, or that you just put words together because they sound nice. But it’s not that either. It feels completely meaningful — it all means very exact stuff. I even feel like it’s super important to use “a” instead of “the” in some songs, you know? I’ll be moving tiny little things around in my mouth, and then I’ll get them just right and it sort of freezes — and that’s fate.

So you don’t have a specific writing process or routine?
Nope. I just live and live and live for a while, and do whatever I’m doing, and then one day I get a moment, and I’ll just sit down and it just happens. Sometimes I write little lines down, little thoughts to remember, but I never end up using them. Actually, I end up having all these little notes that are not in any songs. You know the “To Do” lists that some people write, but never look at again? It’s like that. And later when I find them I feel like I’ve done everything already.

On “Folding Chairs,” you bark like a dolphin.
I love making noises. It comes out of the fact that when I started writing songs, I loved Radiohead, Tom Waits, and the Beatles, and they all have these sounds, these clangs. But in my early stuff, and especially my performances, it was really limited to just me and a piano. I have this natural desire to just climb out of my skin and become five people making noises, orchestrating all these parts together. I could have just sampled a dolphin, but barking is so much more fun to do.

On “Wallet” you sing about finding a lost wallet and tracking down its owner via their Blockbuster Video card. Did this actually happen to you?
Well, I don’t want to destroy someone’s relationship with my songs by talking about them — why limit something that could be so limitless? But the one thing about that song that perplexes me the most is what’s going to happen in 10 years. Will anyone even know what the hell I’m talking about? Do you think Blockbuster will even exist anymore?

Probably not.
Yeah, so don’t you think that song is going to be so confusing for a kid who’s born in, like, 2013?

Not necessarily. We still listen to songs about old stuff, like drive-ins and cars….
That’s true, but drive-ins have been immortalized in movies and have been made a big romantic part of Americana. I think that we should start a charitable organization to help document Blockbuster before it goes extinct. We can make this sweet, sentimental documentary, in which people are constantly falling in love in Blockbuster or dying in Blockbuster, and being born between aisles in Blockbuster.

We can make really cool t-shirts to support this cause, too.
Yeah! “Blockbuster: Where You Wish You’d Been.” Or, what about just “Save the Buster”?

The album is definitely all over the place. But compared to your other records, it feels more upbeat. What’s making you so happy these days?
It’s so funny that you’re saying that, because I was like, “is this the heaviest record I’ve ever made?” I have no grip on reality. I’m so non-objective. Ah, the world is sooooooooo cool. Some of the songs are older than those on [2006’s] Begin to Hope, and some songs that are older than [2004’s] Soviet Kitsch. I have so many songs and I just try to collect them all, and glue them all together. And they span eight years. Some were written two weeks before the end of recording the album, and some were written eight, or five, or three years ago. It’s funny when someone will say something like, ‘Oh, you sound like you’ve grown so much, you’ve matured so much musically,” then reference a certain song I wrote when I was 18. Hey, maybe I was more mature then.

There’s lots of religious imagery on this record, too, especially in the first single “Laughing With.”
I’m always fascinated with faith, religion, and spirituality, and what those things are to each other, or how they come together or don’t come together. When I was done with this record I was like, “Whoa, I have a lot of stuff here that’s just about, like, religion.” Which is amazing. It wasn’t planned, but it’s one of those concepts that my mind is just fascinated with, and I’m always mulling over. Sometimes I’m really positive about religion, but, you know, sometimes I’m really sarcastic about it, too. Hey, that’s God, that’s life!