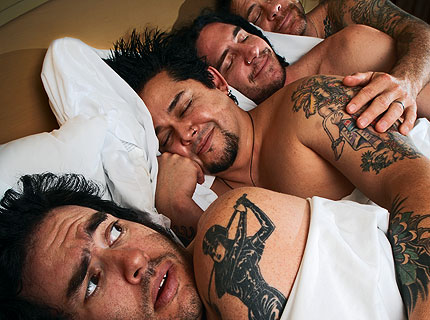 Forget George W., NOFX have a new target: Tegan and Sara, the Canadian duo of singing lesbian twins, who get dissed in “Creeping Out Sara,” a track off California pop-punk band’s new record, Coaster (out April 28).

Over three silly minutes, NOFX vocalist Fat Mike tells a tale of meeting one of the sisters backstage at a festival in Germany, but not being able to tell which one. After realizing that he’s talking with Sara (he heard Tegan was “the cooler one”), he proceeds to completely “creep” her out by asking if she knows where to score some pills or cocaine — and if she’s ever engaged in sexual acts with her sister (yuck!). To top it off, Mike manages to include a bevy of lesbian-related pop-cultural references, from Angelina Jolie’s 1998 HBO film Gia to crooner K.D. Lang.

Hate the lyrics? Look on the bright side: “Creeping Out Sara” features the guitar-driven pop-punk formula that NOFX have perfected over their 26 years in the game.

NOFX’s Fat Mike on His Sobriety, Sexuality: ‘I Think I Came Out of the Closet Even More’