Grab a tissue and throat lozenge: Screamo stalwarts Taking Back Sunday are taking back the stage!

The new album is also the band’s first with guitarist/vocalist Matt Fazzi, who replaced Fred Mascherino in 2008. It was recorded with producer David Kahne (Paul McCartney, the Strokes, Sublime) in New York.

“On this record, we challenged ourselves to write the best songs we possibly could while trying new things in an effort to push the envelope in terms of what it means to sound like Taking Back Sunday,” bassist Matt Rubano said in October, when the band was in the studio. “I think this record has an honesty and an urgency that we haven’t achieved before.” 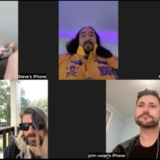 Added vocalist Adam Lazzara: “Matt [Fazzi] has brought new life to Taking Back Sunday. He is the push we needed to break through some walls this time around.”

After appearances at California’s Bamboozle Left festival on April 5 and New Jersey’s Bamboozle on May 3, the band — Lazzara, Rubano, Fazzi, Eddie Reyes (guitar), and Mark O’Connell (drums) –will embark on a 33-date U.S. tour, starting May 14 in Cleveland, OH. The boys will hit major cities nationwide before concluding June 27 in Boston.