Click here for the event's complete lineup and for details on how you can watch from home! 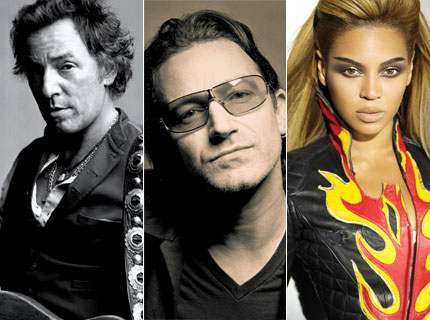 As Barack Obama’s historic presidential inauguration draws near, so do the many celebrations planned in his honor. The biggest of them all: The inaugural kick-off concert at Washington, D.C.’s Lincoln Memorial Sunday, January 18, which features performances from some of music’s biggest stars.

Bruce Springsteen, Beyonce, Bono, John Legend, and Sheryl Crow are a few of the artists slated to perform at We Are One: The Obama Inaugural Celebration At The Lincoln Memorial. John Mellencamp, James Taylor, Stevie Wonder, Usher, Shakira, and Josh Groban will also make appearances, reports the Associated Press.

For those who can’t make it to the capitol for the free event, HBO will be televising the show at 7 P.M. through an open feed, meaning that it will be free to anyone with cable.

“On that first day, weasked Springsteen, Bono and Garth Brooks within a period of 45 minutesand got three `yeses,'” event producer George Stevens told the AP. “We said, `This is going to befun.'”

Stevens said the show is less aboutcelebration than national unification: “The list of stars isimpressive. But this is not a show biz, glitzy occasion.It’s going to be rooted in history, remembering the great president(Lincoln) who led us through difficult times.”