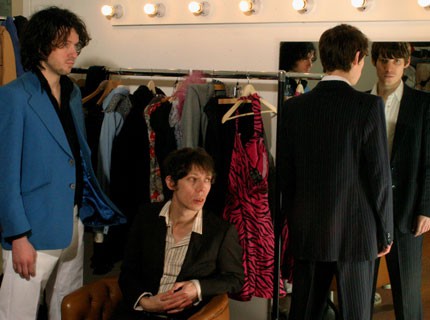 After little-known Scot post-punk band the Yummy Fur split in 1999, drummer Paul Thomson and guitarist/vocalist Alex Kapranos went on to find rock stardom with Franz Ferdinand. Frontman Jackie McKeown, however, founded the 1990s and took the next eight years to record their 2007 debut, Cookies.

Now, after a switcheroo in the lineup, 1990s are back with their second album, Kicks. And its first leak, “The Box,” is full of the same wittastic swagger and ’70s-era punk that made Cookies so damn promising.

Below, listen to the arena-filling drum rolls and crunchy guitar riffs of “The Box.” “Everything you say to me is driving me crazy / But I just want to get back in a box with you,” McKeown sings in his high-pitched voice, a wall of chanting ooohhhs ooohhhs ooohhhs behind him recalling the booze-drenched sing-alongs of debauched ’80s bands like Motley Crue. It makes total sense — after all, McKeown has said 1990s play music “like a blonde gets out of a car.”

SPINfighting: What Was the Best TV Theme of the ’90s?