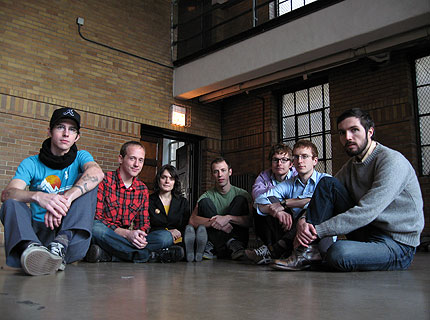 What? Sorry, Sufjan Stevens: Your absence from the music scene has been a tad too prolonged, so it should be no surprise that an up-and-coming band is eyeing your highly-orchestrated indie-rock mantle. Meet Chicago’s Anathallo, a sprawling collective that — in addition to hailing from the state that Stevens’ 2005 opus Illinois was based on — takes cues from his brand of swooning chamber pop and combines it with Animal Collective’s choral insanity to create a sound all their own. And Anathallo’s second album, Canopy Glow (released Nov. 18 via Anticon), is their best yet, finding the band tightening their sound while still retaining their artistic ambition.

Fun Fact: When you have as many band members as Anathallo does, you certainly can’t agree on everything. However, the group allegedly signed to Anticon because it was the only label that the seven separate band members could agree on.