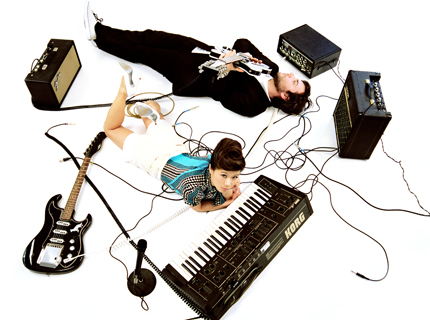 New York shoegazers Asobi Seksu have just released a 7″ single of “Me & Mary,” a teaser for their forthcoming third record, Hush, out February 17. And if the guitar-glossed song is any indication, Hush — the follow-up to 2006’s well-received Citrus — will expand on the band’s dense and poppy hooks by focusing on the fine print.

“We figured we’ve done the fuzzed out pop songs with Citrus. We didn’t want to repeat ourselves,” frontwoman Yuki Chikudate tells SPIN.com of her and guitarist James Hanna’s mindset when making Hush. Though the layers of reverb, ever-ringing background soundscapes, and Chikudate’s English-and-Japanese vocals resemble the best of Citrus, “Me & Mary”‘s chainsaw guitars, ambient keyboard melodies, and bridges of skittering blips show a new more adventurous side to the band.

“James wanted to have a sort of teen angst song on the album and I just put a Japanese chorus to his riff,” Chikudate explains of the tune. “The translation is, ‘I’m chasing after things that don’t exist.’ It just kind of fit since the chorus is really bouncy. It lent itself to Japanese — it’s really rhythmic and syllabic.”

Hush was recorded this summer at New York’s Gigantic Studios with Chris Zane (Ambulance LTD, Les Savy Fav). And according to Chikudate, “Me & Mary” was originally going to be cut from the album.”It’s the most accessible song we’ve written in a while,” she says, “and we didn’t want that. But after we built up the song it just sounded like us.”