Heartbreak has never sounded so upbeat, as on this Swedish quintet's SPIN-approved new album. 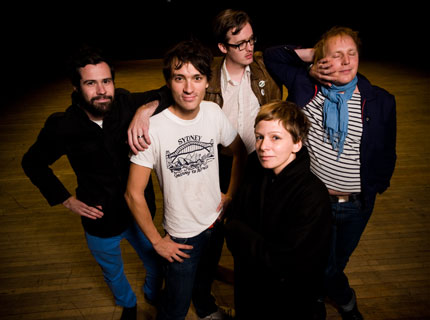 What? Following up their critically acclaimed 2006 debut Nine Times That Same Song, Gothenburg, Sweden’s indie-pop group Love Is All have recorded another superb record, A Hundred Things Keep Me Up At Night, out November 11. With a name like Love Is All you may expect the group to write about the trials and tribulations of romance — if so, you’d be right. But setting themselves apart from other lovelorn bands is Love Is All’s irresistible way of making heartbreak sound like a good time. Their sonically upbeat melancholy is evident from the bouncing verses of “Wishing Well,” which has singer Josephine Olausson joyfully lamenting the hopes of improving a relationship, to the lovely he said, she said duet with guitarist Nicholaus Sparding on “A More Uncertain Future.”

Who? After the breakup of indie-pop group Girlfriendo, Josephine Olausson (keyboards/vocals), Nicholaus Sparding (guitar/vocals), and Markus Görsch (drums) decided to keep making infectious indie-pop together, tapping Fredrik Eriksson (saxophone) and Johan Lindwall (bass) — who had recorded with Olausson and Sparding in side-project Cat Skills — to form Love Is All. Their first release, Nine Times That Same Song, is 31-minute collection of sassy punk praised by critics that picked up steam after NME picked the song “Make Out Fall Out Make Up” as a single of the week. Soon the band was featured on John Peel’s BBC Peel Sessions, kicked off a U.S. tour, and later opened a high-profile outing for Maxïmo Park. After touring extensively in 2006-07, Eriksson left the band and has since been replaced by Ake Stromer (saxophone, keyboards).

Fun Fact: To hold fans over until the new album’s release, Love Is All dropped Love Is All Mixed Up, a remix collection of songs from the band’s debut that featured renditions by artists like Hot Chip and the Bees.