“It” Rapper Plies Flops in NYC

The hotly tipped artist's first-ever downtown performance fails to live up to the hype. Click here to find out what happened! 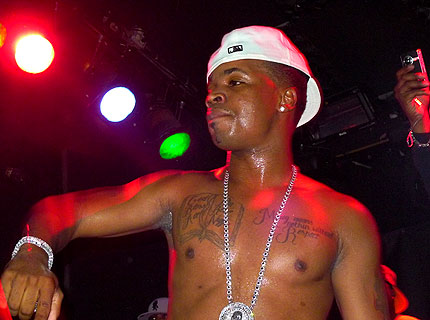 Thanks to a few hot tracks and even hotter collaborators, including T-Pain, Ne-Yo, Keyshia Cole, and Jamie Foxx, Fort Myers, FL, rapper Plies, born Algernod Lanier Washington, has been hailed as hip-hop’s next breakout artist — and is even touted on Vibe magazine’s latest cover as “The Future of Rap.” But last night, at his first-ever New York appearance, Plies’ future looked bleak as he fumbled through an uninspiring 20-minute set

Prior to the set at downtown Manhattan venue the Knitting Factory, Hot 97 DJ Funkmaster Flex spun hits, but displayed a sinking level of enthusiasm as Plies’ starting time came and went. Finally the rapper — gold-toothed and bejeweled — took the stage more than an hour late, accompanied by a bevy of hangers-on and hype-men.

As Plies’ DJ dropped the first beat of the night, an ugly truth was unveiled: The rapper’s style seemed less like the future of the genre and more like its mediocre present — his set was heavy on crunktastic Southern beats and light on artistry or word craft. Worse, not one song was properly finished, including “Please Excuse My Hands” and “Who Hotter Than Me,” both from 2008’s Definition of Real, and “Shawty,” a track originally featuring T-Pain found on 2007’s The Real Testament.

The performance provided bouts of unintended hilarity, though, especially when the rapper invited his “No. 1 Fan” onstage, which, oddly, happened to be three gorgeous females, and when Plies handed audience members $1000 each to give a shout out to their homies in prison. Later, it was revealed that only two fans actually knew people in the pen, and his gambit was somewhat tarnished. Then again, in a night of empty promises, the let-down was fitting.

Larry Fitzmaurice
Tags: plies, We Were There