Travis McCoy and co. pulled out all the stops at West Hollywood's Key Club for this latest event in the SPIN's Ruby Series, sponsored by adidas Originals and presented by Citi. Click here to see the photos! 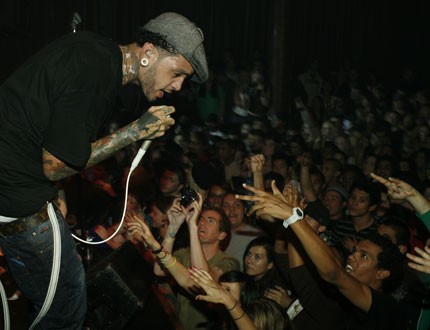 The band kicked off the show with “Home,” a song of their new album, The Quilt. “I don’t think we’ve been to the Key Club since Snakes on a Plane was out,” McCoy tells the crowd, who squeals with delight at his every move. “So I want to see you get sexy, Los Angeles.”

This starts what can only be considered a game of hip-hop Simon Says: hands up, jump up, clap slow, clap fast, sing. At one point, we’re ordered to hug our neighbors. We’re even dared. “Los Angeles, I double dare you to try and stay quiet during this song,” says McCoy. The song: “The Queen and I.” Do they stay quiet? Hell no.

The band pounds through a series new songs and a medley of old ones, including “Peace Sign/Index Down,” “Blinded by the Sun” (dedicated to Bob Ross and his “sweet afro”), the hit “Cupid’s Chokehold,” and “Simple Livin’,” with a couple of surprise guests including T-Pain. At one point, a lady tosses a pink bra onstage that McCoy slings over his microphone stand as Stephen Tyler would a tie-dye scarf. The night’s surely about feeling good: McCoy himself admits, “You know what else feels good? That my president is black.”

Check out our photos of the show after the jump!


All smiles on Thursday Night / Photo by Gregory Bojorquez