Lovelorn Delaware rockers get the jitters -- in a good way -- on their new record, Moonwink, out this week. 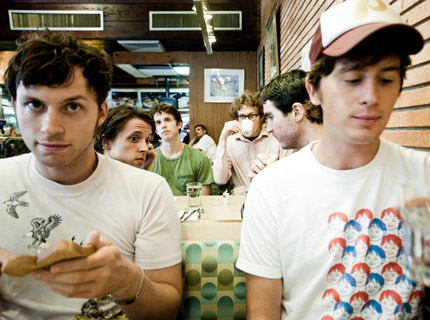 What? Wilmington, Delaware, may have been the setting for the film version of Chuck Palahniuk’s Fight Club, but local indie-rock act the Spinto Band have never been ones to throw fists at anyone. For the last decade, they’ve been too busy writing whip-smart pop songs steeped in equal parts of the Shins’ wistful melodies and Bruce Springsteen’s anthemic arrangements. And this week, the Spinto Band are back with Moonwink, their follow-up to 2005’s Nice and Nicely Done. As their sixth full-length, Moonwink brims with jittery melodies and swaggering sing-alongs — the perfect soundtrack to anything, except probably underground fighting.

Who? Since releasing their 1998 debut, The Analog Chronicles, under the short-lived band name Free Beer, the Spinto Band have built a steady and supportive following with the release of 2005’s Nice and Nicely Done and by touring with acts such as Art Brut, the Arctic Monkeys, and the Kooks. Currently, the Spinto Band is comprised of Jon Eaton (guitar), Nick Krill (lead vocals/guitar), Thomas Hughes (lead vocals/bass), Jeffrey Hobson (drums), Sam Hughes (keyboards/backing vocals), and Joey Hobson (guitar/backing vocals).

Now Hear This: The Spinto Band, “Ain’t This The Truth”