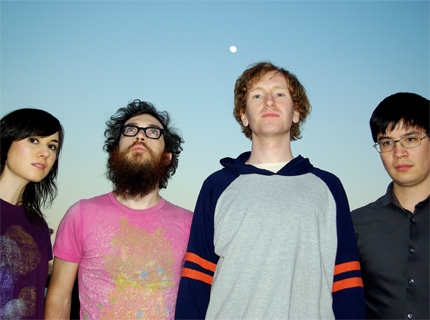 What? This quartet of Brooklyn, NY, noise-pop enthusiasts creates tunes that are jam-packed with glossy hooks and brash sounds, using guitars, keyboards, computer-generated sounds, and jittery vocals. Last year’s breakthrough album, Mapmaker, is followed by the just-released Receivers, for which the group sought out sound samples from their fans — “snippets of noises, field recordings, found sounds, drones, speaking, etc” — and weaved them into an electronic quilt of caffeinated new wave melodies (“Nowheres Nigh”) and rhythmically-jagged anthems (“Little Ones”), proving that collaboration truly is the root of inspiration.

Who? Parts and Labor were formed in 2002 by B.J. Warshaw (bass/vocals) and Dan Friel (keyboards/guitar/voice), who had met three years earlier while the two were working at iconic New York venue the Knitting Factory. Since their 2003 debut, Groundswell, the band has pushed to the forefront of the noise-rock genre, scoring tour-opening gigs with the likes of TV on the Radio, Battles, and Deerhoof, despite being plagued by numerous lineup changes, including the departure of three drummers. Between tour and albums (the band already has eight records!), Friel has worked on solo material and recently released his sophomore album, Ghost Town. Currently, Parts and Labor is made up of Friel, Warshaw, Joe Wong (drums), and Sarah Lipstate (guitar/keys).

Fun Fact: Parts and Labor’s penchant for collaboration has been evident since the band’s beginnings. In 2003, guitar whiz Tyondai Braxton of math-rock juggernauts Battles contributed vocals to their split EP, Rise, Rise, Rise.