Were the Swedish quintet's garage rock riffs lifted from a song by L.A. band the Roofies? Listen and decide for yourself! 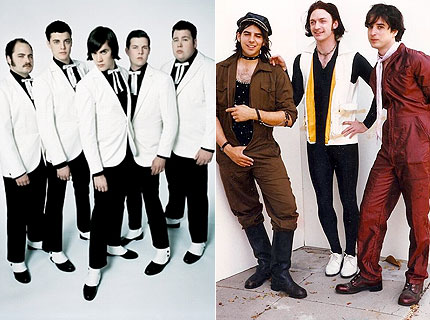 The Hives have been sued for musical plagiarism by Jason Shapiro, a local Los Angeles musician who claims the Swedish band’s “Tick Tick Boom” was ripped from his song “Why You?” which he originally recorded in 1997 with his band the Roofies.

Shapiro had the tunes analyzed by a musicologist after noticing their similarities when he heard the Hives’ song in the movie trailer for the film Get Smart.

“I absolutely love the Hives and don’t feel great about suing a band I love,” Shapiro told the L.A. Weekly. “But I also feel credit is due where it is due if you borrow a riff.”

Citing the lead guitar line and vocal melody, Shapiro believes that the similarities are more than just a coincidence. Decide for yourself by listening to the Roofies’ “Why You?” and the Hives’ “Tick Tick Boom” below. And then leave your thoughts in the comment section.