Which musical heavyweights are planning to make cameos on Folie à Deux? Click here to find out! 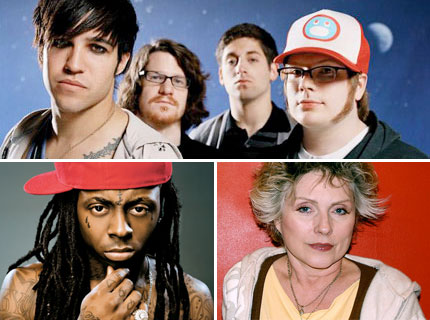 Sure, emo heavyweights Fall Out Boy have worked with some strange sonic bedfellows in the past — their remix-trading relationship with Kanye West, for example.However, judging from the lineup of collaborators for their forthcoming full-length, Folie à Deux, it seems the band’s taste — not to mention their Rolodex — runs pretty deep.

Hip-hop titan Lil’ Wayne, new-wave icon Debbie Harry of Blondie, and N.E.R.D. frontman and production mastermind Pharrell Williams are just three of the artists potentially slated to appear on the new disc, MTV reports. Kanye West was also previously rumored to appear on Deux, which hits stores November 4, but his participation has yet to be confirmed. “I just think the record is going to be diverse,” bassist Pete Wentz wrote to MTV. With a lineup like that, Deux is shaping up to be a smash — but please, dear Fall Out Boys, stay away from the Michael Jackson covers.