Underoath Pound the Summer Out of NYC! 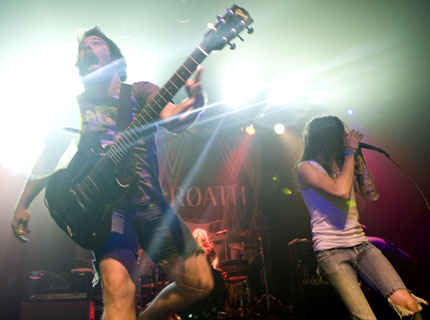 Summer stragglers returned from Monday’s sun-scorched celebrations for Underoath’s Lost in the Sound of Separation CD release party at the Fillmore New York at Irving Plaza.

Opening act The Red Chord blast-beated their way through “Hospice Residence” and “Dreaming in Dog Years” to a floor-punching crowd of angry Christian metal heads. “We want to make you look hard in your Devil Wears Prada or Saosin shirts,” Chords’ Guy Kozowyk joked, as he poked fun at the legion of Underoath followers who waited in anticipation for their screamo saviors to take center stage.

The majority of Underoath’s hour-long emotive metal set drew from 2006’s Define the Great Line, only briefly touching on the newer songs from Lost in the Sound of Separation, which vocalist Spencer Chamberlain described to SPIN.com as “heavier, darker and more experimental.” But spin-kicking students still managed to swirl their arms into a frenzied hurricane of windmills and aggressive hardcore dance grooves from old stand-bys “Young and Aspiring” and “It’s Dangerous Business Walking out Your Front Door.”

Underoath reciprocated the crowd’s intensity, as drummer Aaron Gillespie demonstrated an unexpected snare-standing exhibition of balance during “In Regards to Myself,” planting his feet and perching atop his kit. Even the spastic convulsions that resonated from keyboardist Christopher Dudley’s computerized corner of the stage contributed to the sweat-drenched excitement that filled the Fillmore. He hair-whipped, head-banged, and reached to the sky as if he was seeing visions.

But whether is was Dudley’s vision quest or Chamberlain’s PSA pause to praise the lord before “Writing on the Walls,” the post-hardcore gods responded with two encores, including a special guest performance by Thursday vocalist Geoff Rickly, who graced the stage and shared vocal duties with Spencer Chamberlain on “A Moment Suspended In Time.”

Adam Desiderio
Tags: purevolume, underoath, We Were There

Korn and Alice in Chains Announce Joint Tour With Underoath