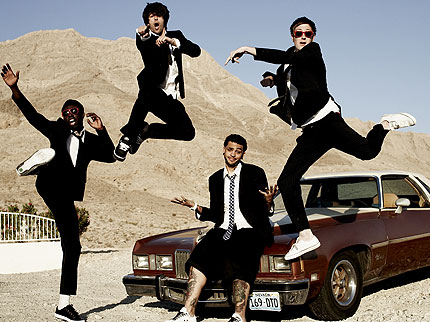 Fear and loathing in Las Vegas are in notably short supply during Gym Class Heroes’ show in late June at the Hard Rock Hotel & Casino.”I’ve had problems with pharmaceuticals for ten years, and I stand in front of you four and a half months sober, and I feel good as fuck!” exclaims frontman Travis McCoy to the roaring crowd. “You deserve a couple more albums from me before I kick the bucket. There’s a high I get standing in front of you I can’t get from any pill!”

It’s a refreshing revelation, since McCoy thanked himself “for putting up with me for the last 24 years” in the liner notes to Gym Class Heroes’ 2006 album, As Cruel as School Children. And although he’s known for mining his demons for rhymes, McCoy introduces last year’s hit single “Clothes Off!!” by asking: “Who wants to get naked?” The first four rows, composed solely of young girls in Forever 21 finery, give him an answer when a massive black bra hurtles stageward. “This is some weaponry right here!” he marvels.

This combination of raw confession, nostalgic sentimentality, and unbridled hedonism has been the trademark of a group built on unlikely elements — a white rhythm section, an African immigrant guitarist, and a biracial MC (McCoy’s mom is Irish and Native American, his father Haitian). “We’re the ‘We Are the World’ of bands,” McCoy says, lighting up outside the tour bus after the show. “We need an Asian violinist; then we’ll be good.” Gym Class Heroes’ sound is equally polyglot, inspired by indie hip-hop (El-P, Aesop Rock, Murs), East Coast hardcore/emo (Snapcase, De La Hoya), and ’80s R&B (too many names to mention). “I was this big black kid smoking cigarettes, but I was just as into Earth Crisis as the straight-edge white kids,” McCoy recalls. “It blew their minds.”

This month, Gym Class will release their fourth album, The Quilt (on Pete Wentz’s Decaydance label via Fueled by Ramen and Atlantic), their first since the single “Cupid’s Chokehold” became an international smash. “They’re the little band that could — Fall Out Boy never even had a No. 1 single,” says FOB frontman Patrick Stump, who has produced much of Gym Class’ recorded output, and sang on “Cupid,” which featured the naggingly catchy hook “Take a look at my girlfriend / She’s the only one I got” (from Supertramp’s classic-rock mainstay “Breakfast in America”). The spotlight is even brighter on the group, thanks to McCoy’s increasingly serious relationship with pop starlet Katy Perry, whose “I Kissed a Girl” topped the charts as their romance became tabloid fodder.

But Gym Class aren’t taking commercial success for granted. For The Quilt, they’ve lined up cameos from Busta Rhymes, hot U.K. R&B upstart Estelle, and Daryl Hall of pop-soul machine Hall & Oates. Plus, the album’s primary producers, along with Stump, are urban hitmaker The-Dream (Rihanna’s “Umbrella”) and Miami-based beatsmiths Cool & Dre (the Game’s “Hate It or Love It”). “[Gym Class] are where music is,” says Dre. “A lot of artists don’t fit a particular lane. Music had gotten so wack — either you were pop or a rapper or a rock band. Now everything’s merging. This period is creating future legends who don’t fit: Kanye, Lil Wayne, Gym Class Heroes. And that’s the secret to their success.”

Still, the four Gym Class boys have to hustle. On the day of the Vegas gig, they rush from an acoustic performance for radio-contest winners to a photo shoot, although McCoy blew out his knee onstage the night before — he’s already had six surgeries, and will probably need another. But nothing slows him down. He limps with a noticeable swagger, flamboyantly waving his cane, semi-ironically mimicking the rap stars who are now his peers.

Read the entire Gym Class Heroes story in the September issue of SPIN, on newsstands now.