Watch exclusive video of "Girl" -- and read SPIN.com's review of the complete show. 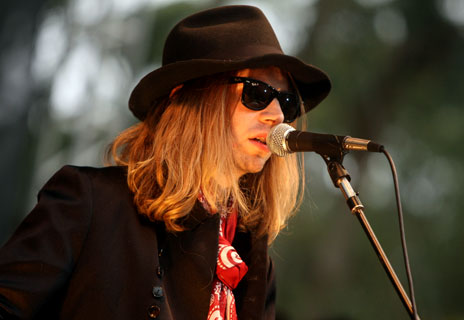 Between his shining moments of absolute genius — Odelay, Sea Change, Mellow Gold – Beck has had his creative and commercially unsuccessful moments. But on the opening night of Seattle’s Bumbershoot, SoCal’s ever-morphing slacker savant validated his staying power by doing what he’s done so many times before: changing up his sound, bringing new life to old tunes, and clearly illustrating he’s mastered the art of the surprise. Really, you never get the same Beck twice.

And Mr. Hansen and his very stripped down backing band wasted no time, opening with “Loser” before rolling through Guero gem “Girl” and a James Brown-worthy, funktastic rendition of “Cigarettes and Gravy.” Later, near the edge of the stage, the band strapped on headset microphones, snatched up digital keyboards and drum machines, and blipped, blopped, and crashed through a two-song set of silly raps, during which Beck’s lazybones, nonchalant demeanor got the crowd bouncing along in bouts of awe and laughter.

A toned down pair of tracks off Sea Change followed, showing Beck’s crack songwriting skills and catalogue-balancing poignancy, but it was old hits and new tunes off Modern Guilt that most tickled this journalist’s fancy. “Gamma Ray,” played at seemingly twice the record speed, was powered by Beck’s deep-ended, riffing guitar work and ’60s soda-pop shop drum work, while encore ditty “Where It’s At” settled it once and for all: Beck’s creativity is ceaseless, rambling, and occasionally off-the-mark. As this crackling set proved, his fans will stand by his side through thick and thin — and I’m one of them.