Duffy: Girl From the North Country

Life in a wee Welsh village may not seem like ideal preparation for the pressures of breakout retro-pop stardom. But so far, Duffy's handling it better than last year's model. 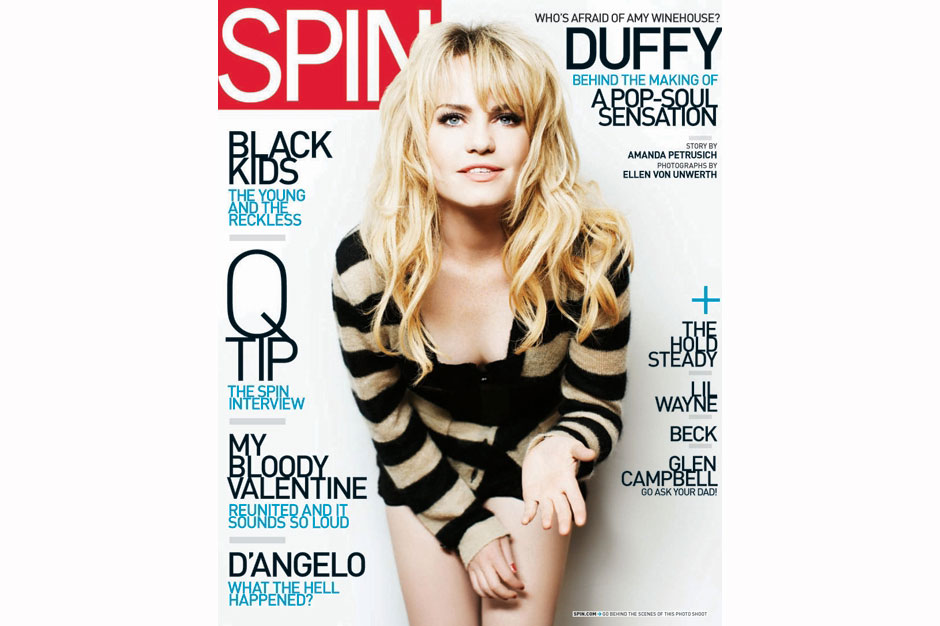 The drive from Cardiff to Nefyn, a remote fishing village on north Wales’ Llyn Peninsula, is only about 160 miles, but it takes me nearly seven hours. Squinting through nonstop rain, muttering at itinerant sheep, and stifling long-ingrained right-side-of-the-road steering impulses, I fret over ominous-sounding traffic signs I can’t read (arwyddion rhan amser?) and take a few desperate gulps of instant petrol-station coffee. I’m chugging north to Duffy’s hometown on the foreboding shores of Caernarfon Bay. I am going to the coast to get unstuck in time.

B4417, the primary road leading into town, is a single narrow lane, and when an oncoming car approaches, I’m forced to pull my rented Fiat off into a pasture. Once a bustling vacation destination for British golfers and families, Nefyn now has the disembodied feel of a boomtown gone bust. The population hovers around 2,500, and — save for a couple of pubs and the Nefyn & District Golf Club — recreation options are few. Although Nefyn is physically stunning — all pristine beaches, hand-built rock walls, and crumbling seaside cottages — it also feels self-contained, unchanging, and artless. It’s not hard to see how someone reared here could end up singing songs from another era, from another place.

“A girl from Wales — that’s all I am,” Duffy says, smiling. We are standing backstage at the Great Hall, a dim, boxy concert space in Cardiff University’s student union, where she’s kicking off a brief, sold-out spring tour. She paws through the amenities (a heap of chips, bottled water, a few packages of lunch meat, some Kit Kats arranged on a white paper plate) and prepares a tiny, plastic cup of tea.

“I make the best tea, I promise,” she beams. While it steeps, we drag a pair of battered folding chairs onto a concrete balcony. She lights a cigarette. We’re still blowing on our cups when a droopy-eyed ambulance driver pulls over and begins fiddling with the sign bolted to the top of his vehicle. He’s half-humming “Mercy,” the throbbing hit single from Rockferry, Duffy’s debut collection of Motown-inspired soul tracks with unshakable classic hooks. He tugs at the warped bits of plastic holding the EMERGENCY placard in place, wholly unaware that he’s standing less than ten feet from the song’s creator, a rising, if divisive, talent whose first release not only debuted at No. 1 in the U.K., but also outsold the rest of the Top 10 combined. “What’s that you’re whistling?” she trills playfully. “Just something I heard on the radio,” he barks back, unaware. “Ah,” she says, grinning.

Aimee Duffy is about to turn 24, but she seems, in some ways, ageless: She’s giddy and warm, gracious and clever, a beguiling mix of kid sister and knowing grandparent, the type of girl who will snicker about the skirts at Topshop while insisting you accept a proper cup of tea. In May, Rockferry debuted at No. 4 in the U.S., sweeping the charts just as Amy Winehouse’s similarly retro-leaning recording career was eclipsed by her own epic self-obliteration. Already, Duffy has graced the racks at Starbucks, sold out New York’s legendary Apollo Theater, serenaded Regis Philbin onmorning television, and seen the increasingly ubiquitous “Mercy” featured on Grey’s Anatomy, rapped over by the Game, and covered by Bon Jovi. (“It’s a strange feeling when a person at that level is playing a song that I wrote,” she says. “It’s like, Oh my gosh, I’m really here now. Bon Jovi knows that I exist.“)