VH1 Rock Honors After-Party Brings Out Celebs and Who Faithful

After the Who were enshrined in rock lore by VH1, everyone from Marisa Tomei to Lil' Zayne partied at the W Los Angeles in Westwood; check out the photo gallery from the red carpet and inside, and come back tomorrow for video coverage from the show itself. 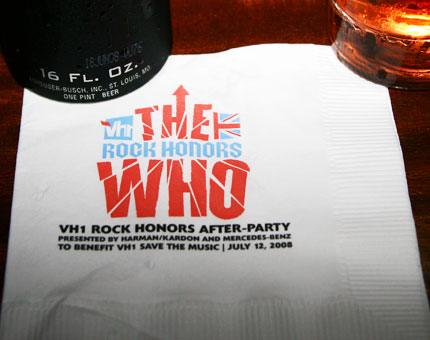 It was quite a show on Saturday night, July 12, at the UCLA Pauley Pavillion, as VH1’s Rock Honors paid tribute to the Who with performances from Pearl Jam, the Flaming Lips, Tenacious D, the Foo Fighters and Incubus. But the rock’n’roll lifestyle the pinball wizards helped pioneer made its way down to the After-Party at the W Los Angeles in Westwood.

Cast members from VH1’s Rock of Love could be spied bar-hopping and consuming drinks with names like the Green Monster, while Margaret Cho entertained some admirers and Marisa Tomei could be seen slinking off for a drink.

Check back in tomorrow for full video footage from the Rock Honors red carpet with SPIN.com’s rogue reporter Ben Lashes, but in the meanwhile, enjoy this gallery of images from the raucous party:

Lil’ Zayne makes his entrance for the evening. / Photo by Paul Noblin

Two Who fans take in the festivities. / Photo by Paul Noblin

Rock of Love’s Jessica, Brandi C. and Ambre crash down on the W. / Photo by Paul Noblin

There was no shortage of the glamorous life on display during the event. / Photo by Paul Noblin