Nine Inch Nails' free digital album, The Slip, gets its wings today, as the limited-run CD version hits stores (with gatefold vinyl to follow on Aug. 12). 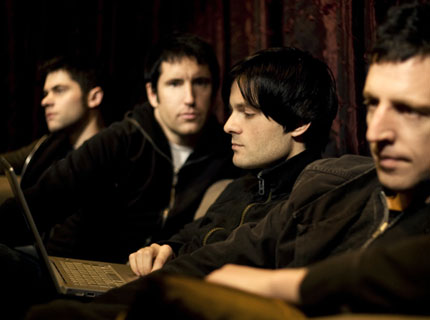 What? On May 2, The Slip-Nine Inch Nails’ eighth full-length since 1989-landed on the band’s website with little fanfare, and no option to pay. “This one’s on me,” a message from Trent Reznor read, his giveaway serving as the culminationof a career-long battle with what the alt-icon saw as the music industry’s unfair exploitation of consumers. And this gift is no fruitcake. The Slip exhibits the full force of Reznor’s talent for blending visceral emotional outpouring and harsh industrial and electronic urges into accessible song structures. From the dissonant piano and whispered sour nothings of “Lights in the Sky,” to the titillating BDSM themes of lead single “Discipline,” the album proves that age and maturity have not dulled Reznor’s edge, nor has freedom from corporate shackles brightened his pre-apocalyptic world view.

Who? Nine Inch Nails, the project of multi-instrumentalist mastermind Trent Reznor, burst onto the rock scene in 1989 with a sound that introduced a generation of rock fans to the harsh world of Throbbing Gristle and Skinny Puppy-style industrial. But while his forbearers specialized in a sound as detached and cold as an unmanned factory floor, Reznor built dance-pop structures and occasional ambient beauty into his thump and buzz, put his bleak and provocative lyrics at the forefront, and created a radically effective catharsis of angst.

In the next five years, NIN released two more albums, all the while struggling with the demands of record label executives – stresses that eventually lead to a five-year dearth in full-length efforts. Reznor returned in 1999 with The Fragile, but it wasn’t until 2008 that he finally cut his major label ties and took complete control of his musical output. Along with Radiohead, NIN has played a principal role in the recent movement to cut out the corporate middleman and offer releases directly to fans online. The Slip is the group’s second such offering this year (the other being Ghosts I – IV), and the first to have arrived free of charge.

Fun Fact: Nine Inch Nails’ viral marketing campaign for the 2007 concept album Year Zero began with a number of flash-drive keychains left in the bathrooms at NIN concerts. In addition to new songs, the drives contained a noisy audio file hiding a phone number that, when called, played recordings of conspiracy theories.