As Lil Wayne Hits No. 1, We Encourage All to ‘Bang Insanely, Not Try to Understand’ 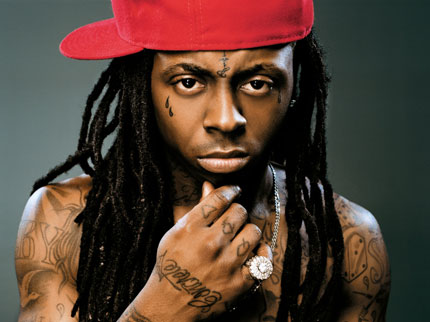 “They cannot see me / They are like Stevie,” Lil Wayne once boasted. And with the heights our favorite rasping martian and his syrup-fueled spaceship have reached recently, he’s absolutely right. Larger than life, but too high to see (in more ways than one), the Young Carter has again peaked at No. 1 on the Billboard charts, four weeks after Tha Carter III debuted to platinum sales in its first week — a feat no album had accomplished since 50 Cent’s The Massacre in 2005.

Just in time to celebrate another 156,000 discs moved, the self-proclaimed and increasingly undeniable Best Rapper Alive also popped the cork on plans to launch a line of champagne he’s calling Halo. And with three singles (“Lollipop,” “Got Money” and “A Milli”) still swimming around the singles chart, it truly is the summer, or even Year of Wayne — a conundrum explored in Spin Music Editor Charles Aaron’s insightful and star-rating-resistant album recap. Because standard critical mass simply doesn’t apply to a “tiny vulgarian who talks more shit about our confounding times than anyone.”