Love as Laughter Celebrate with ‘Holy’ Dessert in NYC 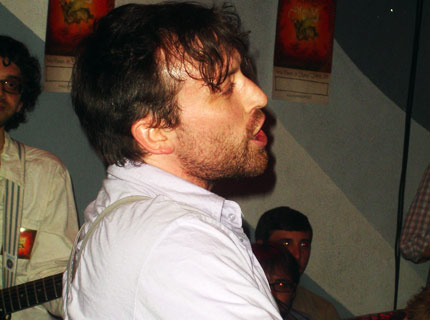 Though the bare-bones sound refused to reach past the first two rows, celebratory icing-covered cake traveled throughout Manhattan’s Beauty Bar last night (June 24) as Brooklyn indie rockers Love as Laughter treated fans to dessert following an unplugged performance of songs off their new set, Holy, which was cut short due to sound difficulties.

The soulful fivesome began their set with album gem “Baby Shambles,” letting subtle hand percussion and gentle guitar strumming give way to frontman Sam Jayne’s bluesy yelps. Tambourines and drums were added to the mix on the next song, the stiffly rhythmic “Peace,” during which Jayne’s lead guitar work was barely audible to fans crowded on the Beauty Bar’s dance floor.

“You guys all just want to eat cake, right?” Jayne joked. “Only like five people can hear us, so we’ll only play one more song, then get loose.”

The playful harmonizing of “Konny & Jim” closed out the set, as Love as Laughter struck their best southern rock pose and finished on a group howl. Band members did not appear frustrated over the truncated set, despite the songs’ frequent inaudibility, and were determined to celebrate the group’s sixth album after setting down their instruments. For a glimpse of the fervor that went into the mini-performance while it lasted, check out the video clip below.

Now Watch This: Love as Laughter at NYC’s Beauty Bar

More photos from this show >>

Greg Hunter
Tags: love as laughter, We Were There

Sam Jayne and the Plight of Indie Musicians Amid the Pandemic

Sam Jayne of Brooklyn Band Love As Laughter Has Died