Southern kin lead a rowdy hootenanny at the Other Tent with raucous bluegrass-meets-punk tunes. 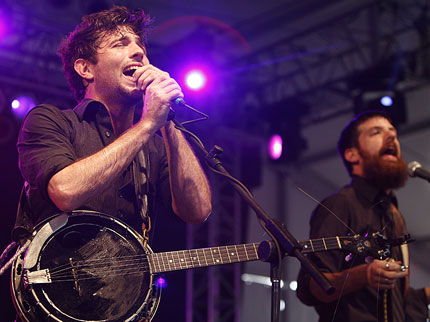 Concord, North Carolina’s Avett Brothers drew a massive (and especially rowdy) crowd to Bonnaroo’s Other Tent Saturday, picking and stomping their punk-tinged bluegrass into the stratosphere and proving why they just may be one of the most underrated acts at this year’s festival.

While singer/banjo player Scott Avett pounded away at the kick-drum located just beneath his mic, the trio, joined by cellist Joe Kwan, rolled through crowd favorites like “Die Die Die” and “The Weight of Lies,” both off 2007’s Emotionalism, earning deafening applause that often lasted well into the next song. At the mention of the Brothers’ home state during “Salina,” the crowd erupted into a near frenzy, and as the band finished out their set with a captivating, but brief encore, it was obvious the Avett Brothers wouldn’t remain under the radar for long.