Plus Amy Winehouse is cleared on all charges of suspected drug possession. 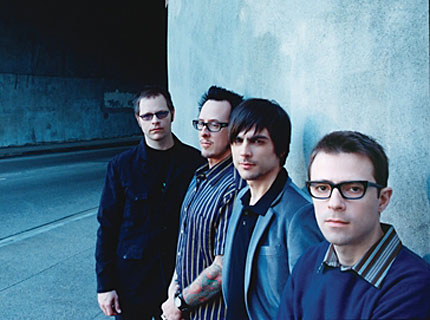 Surely appeasing fans’ fervent anticipation, Weezer have announced that their latest album, a self-titled affair already coined as The Red Album, will drop June 3 rather than the originally slated June 24 release date. Hooray! In the few weeks that remain, hold yourself over with a sneak peek of first single “Pork and Beans,” streaming now at Weezer’s MySpace page.

Arriving tardy to the solo release game — his OutKast constituent Andre 3000 got the jump on that — Big Boi has unveiled details for his debut, entitled Sir Luscious Left Foot… Son of Chico Dusty. According to Billboard.com report, the record, slated to arrive later this year via Laface/Zomba, features contributions from Andre 3000 and Wu-Tang Clan’s Raekwon (first single is “Royal Flush”), Mr. DJ (“Sir Luscious”), Mary J. Blige (“The World is Too Big”), and the Organized Noise production crew.

Once again, Amy Winehouse has evaded punishment from the London police. After a slap on the wrists for her recent debacle in a North London bar, police have “concluded their inquiries and no charges will be brought” against Winehouse for her arrest last week for alleged drug possession, stemming from a widely-circulated video of her smoking what appeared to be illegal drugs. [Via NME.com]