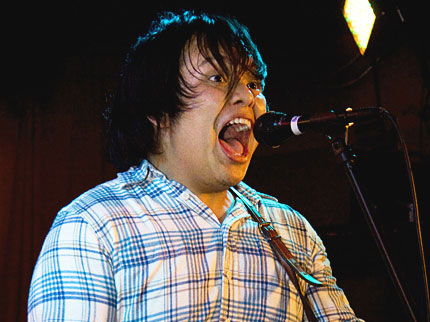 Despite the late hour on a Monday night (May 12), Los Angeles’ the Little Ones brought out their big guns as fans stoically gathered at Seattle’s Chop Suey to hear the quintet’s shiny indie-pop blast out in a grande-sized set.

With hints of 1970’s surf rock in attire and arrangement, the five gents kicked off the evening with a smiley performance of fan favorite, “Oh, MJ!” And with huge, toothy grins and a bit of bounce in their step, the Little Ones easily turned a sleepy, I-can’t-believe-it’s-only-Monday audience into a jumping, clapping mob in no time at all; soon the venue was bursting with bouts of laughter, happy-go-lucky dancing, and spirited sing-alongs.

Using tambourines, hand claps, cowbell, shakers, and a woodwind-flavored synth, the shaggy-haired quintet didn’t hesitate to preview their latest LP, Morning Tide (originally set for release in April, but pushed back to later this summer). The venue bounced about to the new tracks, including the groovy, chirping summer-whimsy “Ordinary Song,” as well as many of the band’s earlier tunes, like “Cha Cha Cha,” off their 2006 debut EP Sing Song.

Later, even after their lengthy, catalogue-wide set, the now energetic crowd easily coerced the Little Ones to return to the stage and play a past-Midnight mini-encore before they wished Seattle a goodnight, biding adieu to fans’ Monday blues as Tuesday rolled into sight.

Karalee Sargent
Tags: We Were There