STP frontman lashes out against ex-bandmates, including "the illustrious Guitar Hero, Saul Hudson, a.k.a. Slash." 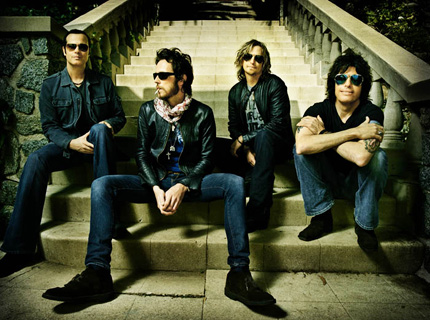 Following the recent war of words between drummer Matt Sorum and frontman Scott Weiland, and axeman Slash’s recent affirmation that Velvet Revolver would continue on with or without their singer, Weiland has been officially booted from the hard rock outfit.

“This band is all about its fans and its music and Scott Weiland isn’t 100 percent committed to either,” Slash said yesterday in a statement to Billboard.com. “Among other things, his increasingly erratic onstage behavior and personal problems have forced us to move on.”

Weiland, never one to back away from a scrap, released a statement this morning to address to his former bandmates — and it’s heated!

“After reading the comment by Duff [McKagan, bassist], Matt [Sorum, drummer], Dave [Kushner, guitarist] and the illustrious Guitar Hero, Saul Hudson, a.k.a. Slash, I find it humorous that the so called four ‘founding members’ of Velvet Revolver, better known to themselves as ‘the Project’ before I officially named the band, would decide to move on without me after I had already claimed the group dead in the water on March 20 in Glasgow.”

And he’s just getting started…

“In response to Slash’s comment regarding my commitment, I have to say it is a blatant and tired excuse to cover up the truth. The truth of the matter is that the band had not gotten along on multiple levels for some time. On a musical level, there were moments of joy, inspiration, fun… at times, but lets not forget the multiple trips to rehab every member of the band had taken (with the exception of one member, no need to mention his name).”

Weiland goes on to detail his future in the reunited Stone Temple Pilots, a group of musicians “who have always had my back,” and even suggests a certain singer to replace himself at the helm of Velvet Revolver: “I think Sebastian Bach would be a fantastic choice,” he mocks.