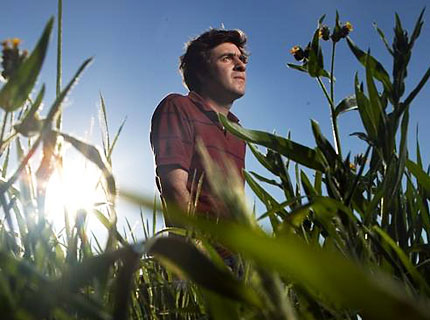 What? Though a disciple of a path well beaten — organic singer/songwriter wielding riffing guitars and tapping ivories — Nik Frietas carves a niche all his own with lyrically meditative, wistful, and Americana-tinged tunes paying tribute to yet never aping touchstones likes Bob Dylan, Paul Simon, and even Ben Kweller. And with Sun Down, Freitas’ third record to date out May 6 via Team Love, the troubadour dives into the frequented genre’s fabric and offers an album that simultaneously evokes sentiments of nostalgia and innovation, especially with the down-home drums and choogling six-string of the album’s title track, and the 12-bar blues of “Sophie.”

Who? SoCal native Nik Freitas, a performing solo artist who also teams up with backing band the Head Gates for touring and recording purposes.

Fun Fact: Originally a photographer for skateboarding magazine Thrasher, Frietas’interest in music blossomed when a co-worker sold him an antique piano once used by a street musician. The piano remains in Freitas’ possession and is featured on Sun Down.