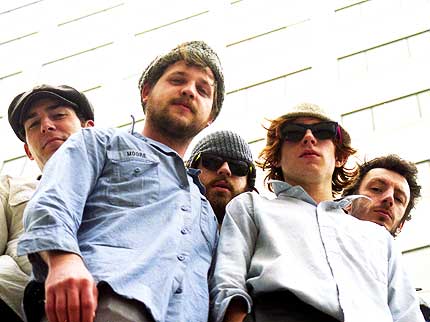 Dr. Dog will follow up 2006’s acclaimed set We All Belong with the July 22 release of Fate, the harmonious, hippy dippy rockers’ fifth record, which, according to a Billboard.com interview with band co-founder Scott McMicken, will “in a way, be the first true Dr. Dog record.”

Recorded over six whirlwind weeks in the quintet’s Philly studio, and mixed over just two — “it’s the fastest we’ve ever made a record,” McMicken said — the new album, uncharacteristically, features the use of ProTools for some effects. But with modest yet artistic ambitions, a sequencing blending each track to resemble one long album-length song, and an “anything goes” approach, the digital equipment may have been necessary.

“We’ve always made what we’d call concept records. It’s only recently that I haven’t been embracing the term ‘concept’ as much,” said McMicken. “When people hear that term, they think Dark Side of the Moon or some far-reaching lofty fantasy. In our case, it’s much simpler.”

While you wait for Fate to arrive, check out video of Dr. Dog performing older track “California” at the SPIN and MySpace San Jacinto Saloon at SXSW 2008.