"The old business model is dead," says drummer Jimmy Chamberlin. "I think what we'll do is start releasing songs." 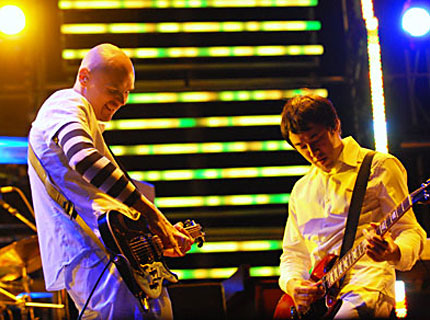 Smashing Pumpkins will return to the studio this spring to begin working on new material for a forthcoming release, but they’ll deliver them in a surprising way. “Billy [Corgan] and I are going to start working every day like we used to,” drummer Jimmy Chamberlain told Spinner.com (via the Daily Swarm). “But I don’t think we will make records again… the old business model is dead. We want to keep things vital and keep things viable and get our music across while remaining relevant.”

After the release of “reunion” LP Zeitgeist — which was mass marketed as a conventional disc via exclusive deals with the likes of Best Buy — Smashing Pumpkins’ contract with Reprise Records has expired, and now the label-less alt-rock kingpins are exploring other methods of distribution, but not the Radiohead method of releasing a full album online.

“I think what we’ll do is start releasing songs,” Chamberlin explains. “The record or CD format places too many limitations on your piece of art… [we’ll] create the framework where we can release a number of songs and maybe create a title. We can gather three or four songs, but it will all flow up to a larger body of work. But to call it record in the traditional sense would be anachronistic.”