The countrified folk-revivalists churn out whiskey-drenched ballads, and drum up support behind their U.S. debut. 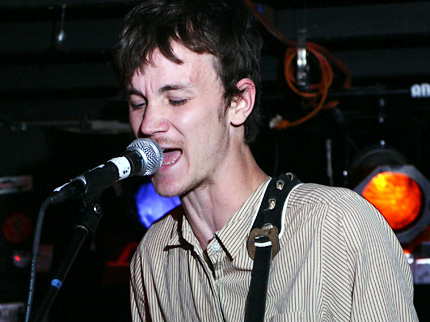 Many words come to mind while watching a performance from rural upstate New York’s Felice Brothers, but last night (March 25) at Denver’s Larimer Lounge as the boys cut through tracks spanning their catalog, and unveiled new songs off their self-titled Team Love debut with sheer exuberance, one word seemed most relevant: jubilee. The crowd wholly echoed the band’s lively, celebratory mood with wild hoots, and sang along though unsure if the quintet was in the theatric throes of a boogie-down shtick, or just brazenly intoxicated.

Frontman Ian Felice’s whiskey-kissed pipes croaked over “Ballad of Lou the Welterweight” and “Take This Hammer,” both off 2007’s U.K. release Tonight At the Arizona, and shined on new tunes like the accordion-heavy, Bob Dylan-esque ballad “Frankie’s Gun,” as well as “Radio Song” and “Whiskey in My Whiskey.” Throughout the performance, the crowd and the band’s collective mile-high party didn’t budge; the Larimer Lounge clapped, danced, and sang along right up to the magnificent end.

We asked: The Felice Brothers sing about lots of gritty subjects from teenage pregnancies to being arrested. What’s the most gritty, song-worthy act you’ve been involved in?

Leading the hootenanny, Ian and James Felice at the mic. / Photo by Eric Gruneisen

Tiffany Childs
Tags: We Were There