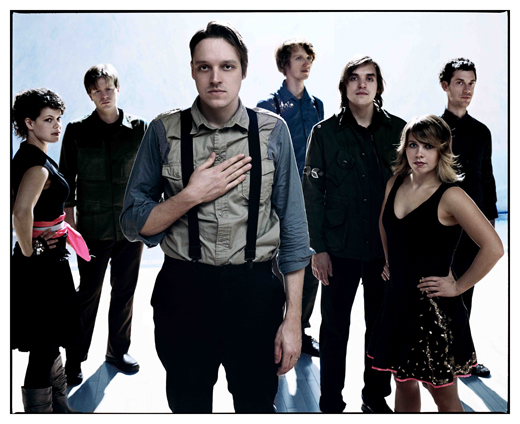 Yesterday (Feb. 3), millions indulged in one of America’s greatest pastimes, the Super Bowl, and Tom Petty and the Heartbreakers’ lackluster halftime performance. And as the indie rock crowd may have noticed while reclining in a haze of cheap beer and chicken wings, the Arcade Fire’s tune “No Cars Go” popped up in an NFL ad during one of the beyond-expensive-for-airtime commercial breaks. Yes, slightly odd. Well, turns out Win Butler and Co. didn’t approve the usage of said tune — um, oops! Lawsuit? Well, according to reports, legal moves have yet-to-be made from the band’s camp. [Via Pitchfork]

Seminal post-punk outfit Gang of Four, which reunited in 2005 to re-record old material, is currently working on fresh tunes and hopes to release a new record in the near future. “So far [the new songs] aren’t huge departures from what we’ve done before,” bassist Dave Allen told NME.com. “The biggest surprise is that we’ve been capable of getting back to our roots… It’s more aggressive, more angular.” But there’s something missing: drummer Hugo Burnham hasn’t been involved in the recent sessions. Um, Gang of Three?

As anyone familiar with OK Computer may recognize, Radiohead’s Thom Yorke has a few anxieties — notably with transportation. And it’s just that fueling the rocker’s latest bout of nervousness as the band’s yet-to-be detailed summer tour behind In Rainbows looms. “Getting on a plane I hate with a passion,” he told BBC Radio. “I try not to panic all the way through. It gets worse but you just kiss the ground when get there and carry on.” Guitarist Jonny Greenwood, on the other hand, is anticipating the travels. “I’m addicted to it and I can’t wait,” he said of touring. “It’s like backpacking in enormous luxury…” [Via NME.com]

Sadly, Nate Ruess and Sam Means, leaders of SPIN.com Tour Blog alums and beloved indie rock outfit the Format, have decided to curb the project for the “foreseeable future” to pursue solo projects. “We have decided to put the Format aside and work on our individual material. This was a tough decision,” Means said in a statement. “We came out of tour last fall and realized that we all have different aspirations right now. It didn’t feel like the right time to create a new Format album,” Ruess added. “There’s nothing scandalous about this decision,” Ruess continued. “Sam and I remain extremely close… We want to thank the fans who made this the best 5 years of our lives.”