The hushed acoustic love letters of this quintet win the heart of Conor Oberst. 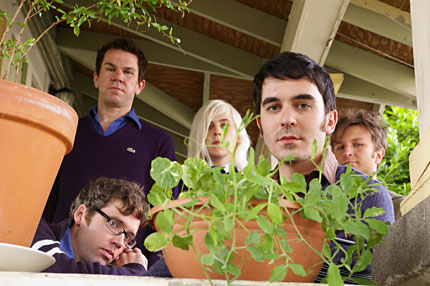 Who: Lead by the intimate, bedroom-pop pathos of frontman Aaron Gerber and co-vocalist/drummer Sarah Winchester, this Portland, OR-based quintet — also featuring guitarists Zach Boyle and Aaron Krenkel, and bassist Louis Thomas — caught the Bright Eyes of one Conor Oberst and his Team Love label co-owner Nate Krenkel, and soon found themselves under contract and in the studio. Their Adam Selzer-produced (M. Ward, The Decemberists) debut LP, Cove, which follows the 2007 release of 7″ The Feather Test, is out March 4.

What’s the Deal: With Cove, A Weather bring new meaning to the whispering, romantic indie-folk renderings of predecessors like Kings of Convenience and, at times, Camera Obscura and Belle and Sebastian. Album tracks “Spiders, Snakes,” “Hanging Towers of Baltimore,” and “Screw Up Your Courage” highlight an impressively fluid yet never repetitive record lushly draped in twinkling, acoustic instrumentals, fluxing organs and Mellotrons, and an inventive, complimentary rhythm section. But here, the band’s lyrical content — chiefly a lover’s diary entry — never demands a “twee” stamp, rather acting as the icing on their comforting and tender sonic cake.

Fun Fact: From obscurity to center stage over night: Despite only a handful of shows under their belt, and no album release to date, A Weather found themselves playing to a packed house in Seattle alongside Conor Oberst soon after signing with Team Love. To commemorate the special show, the band sold custom stuffed animals sporting hand-sewn “A Weather” capes. The animals — coined as the “A Weather Fuzzy Buddies” — each arrived with a custom name and a list of likes and dislikes.