Number One With a Ballet 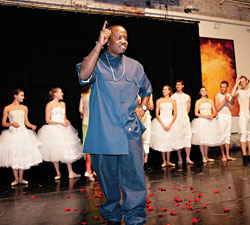 As anyone who saw the dance sequences in Idlewild can attest, OutKast are no strangers to ass-shaking. Yet Antwan “Big Boi” Patton had little experience in the realm of tutus and pliés before the Atlanta Ballet approached him about collaborating on a new production. “I’ve dated a couple of ballerinas,” he says. “But I was like, ‘That sounds kind of dope — let’s crank it up.'”

If Dirty South hip-hop and a 400-year-old European dance technique seem like an odd match, well, that’s the point. “These are two art forms that are identified in our culture as so completely opposite,” says choreographer Lauri Stallings. “And rather than deny that, we’ve become enthralled by it.”

Running for six performances at Atlanta’s Fox Theatre (starting April 10), the show, titled big, stars Big Boi himself and a younger dancer named Little Big, as they move through a series of dance vignettes set to OutKast hits (even the intense “B.O.B.”), unreleased Big Boi tracks, and material from his upcoming solo album — all accompanied by a live band. According to Stallings, big is about “examining the American dream — or the lack of it — from a 360-degree perspective.” The cast also features approximately 85 dancers, as well as members of Atlanta’s Dungeon Family hip-hop collective, including Sleepy Brown and Joi. Even Goodie Mob/Gnarls Barkley frontman Cee-Lo might make an appearance.

If all goes well, Big Boi and his ballerinas could hit the road. “We’re talking about taking this thing to New York and L.A. and Europe,” he says. “Why cheat the rest of the world?”