Sometimes, something suddenly appears that’s so unsettling, even the king of shock rock himself is startled. That’s what happened when Alice Cooper was forced to cancel his European tour in the midst of something scarier than what Cooper does in his notorious horror rock show.

“It’s strange times. I’ve never lived in a time when one infinitesimal thing that you can’t even see has literally stopped the entire world,” Cooper says, sounding astonished while speaking from his home in Arizona.

Cooper’s wife, Sheryl, is also on the call. She performs in her husband’s show (often portraying a psychotic nurse), and she seems stunned as she recounts the unexpected and abrupt end to their show in Berlin. As she tells it, they were told to “jump off the stage and go directly to our bus in full makeup and costumes.” Almost 24 hours of exhaustive travel later, they made it back to Phoenix – but they “got home, no food in the house, went to the grocery store, no food at the grocery store. What’s happening?”

Unfortunately for the Coopers, they have more than just canceled shows to worry about. They’re worried about the pandemic will affect Alice Cooper’s Solid Rock, the nonprofit organization they founded in 1995. The organization operates The Rock Teen Center, a 28,000 square foot facility in Phoenix where people ranging from ages 12 to 20 can get free instruction in music (both instrument lessons and recording studio training), dance, art, film and photography, among many other artistic options.

Cooper says Solid Rock is something they feel driven to do.

“We’re based on a Christian ethic,” he says. “The kids say, ‘Why are you doing this?’ and we tell them, ‘Because the Lord told us to. We don’t want anything from you except you to show up and create.’ And they say, ‘Well, what do you get out of it?’ And I go, ‘Watching you create!’ That’s all there is to it.” Another reason for doing this, he adds, is that “We feel that every teenager is at risk – not just the ones that come from the gang world. They’re all in trouble unless they have some guidance.”

But while Solid Rock is a labor of love for the Coopers, it also requires funding to operate – and the pandemic has forced them to cancel Solid Rock’s biggest fundraising event of the year, Alice Cooper’s Annual Rock & Roll Golf Classic tournament. It was scheduled to take place on April 26. Canceling the tournament has “put a gigantic dent in funds,”  Jeff Moore, Solid Rock’s executive director, says.

Moore says the virus-driven economic downturn also calls into question how much donations from individuals and corporate sponsors will be affected this year. “Their contributions are based on their profits and the successes of their businesses,” he says. “With all this happening, I don’t know what positions they will be in. They have been fantastic sponsors over the years. But we also have to be mindful that they could be severely hurt through this crisis.”

As Solid Rock faces this financial hit, logistical problems are also arising. As people self-isolate at home, the Teen Center staff have scrambled to continue offering activities, such as putting up video series with lessons for various instruments, and livestreaming performances from the teens themselves. The goal, Teen Center director Mark Savale says, is to “engage and keep in contact with our teens. If we can’t see them face-to-face, we can at least put some content where they can actually participate.”

This emphasis on interpersonal connections is at the heart of what Solid Rock and the Teen Center are all about, according to Ale Moran, 20, and Kailee Schoeff, 18. Both of them participated extensively in many of the programs before becoming part-time staff members there. (Moran teaches art, and Schoeff teaches photography). They know firsthand how the Center can help – and the danger that could come now that this pandemic is undermining this support. 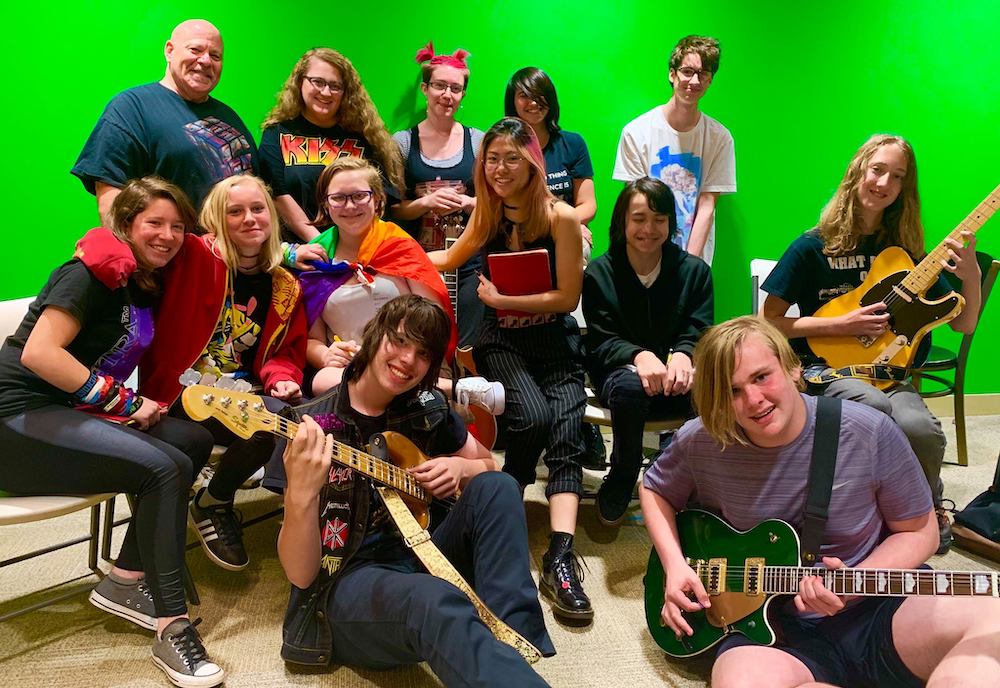 “I was a freshman when I first started coming to the Rock,” Schoeff says. “I didn’t have a lot of friends, nobody really talked to me. I walked in and all the teens and the staff were super welcoming and wanted to be my friends right off the bat. I was really shocked. I wasn’t used to that. So it was intimidating in a very good way.” Now, she says, she’s making an extra effort to text and connect with the teens. “Especially at times like this, it’s important to reach out to them and make sure they’re not feeling alone or ignored.”

Moran also worries about what this loss of contact could do, since she knows firsthand what a good influence the Center can be for teens. “Before I started going to the Rock, all my friends would drink and do drugs,” she says. “To me, there was no way out – I thought that was going to be my life.” Now, she can advise other teens at the Center. “I can speak on what I went through; it’s not just, ‘I’m telling you what to do.’ It’s like, ‘No, I’ve gone through that. I don’t want you to have to go through that, too.’”

Stories of the positive impact of the foundation keeps the Coopers motivated to keep it going. “You see a kid who was uncontrollable, and he comes in, and [now] he’s the one that’s blossoming the most – it’s unbelievable,” Cooper says. “We just sit there and go, ‘Wow, he was the kid that I didn’t want to deal with. Now he cannot wait to get in [when we open]. I sit back and smile. These kids, all they really need is some creative outlet.’”

But, Moore says, trying to accomplish this via remote outreach is an extremely frustrating endeavor. “It’s very strange to have things so quiet and to not have the teens here, because we are a relational ministry. Trying to do things through social media, that interpersonal interaction is difficult at best.”

For their part, the Coopers are determined to try to turn this situation into an opportunity. “Alice and I are encouraging the kids at Solid Rock to use this time to create,” Sheryl says. “Paint something. If you’re a dancer, choreograph. Keep pressing forward, and then when we’re together once again, show us what you’ve got.”

Should funding still come through as hoped, there are other post-pandemic plans in the works as well. A second Teen Center, in nearby Mesa, is still scheduled for a December opening date. They hope that the golf tournament can be rescheduled for this fall. And, the Coopers say, their daughter Calico (a member of famed improv group The Groundlings) is creating a theater program at the Center – and Johnny Depp (Alice’s longtime friend and Hollywood Vampires bandmate) has volunteered to teach an acting workshop.

Bringing in celebrity volunteers is a tradition that is also on the “wish list” for when the Center doors can reopen. Because of Cooper’s legendary music career, many famous musicians have conducted workshops with the teens throughout the years, including Rob Halford (Judas Priest), Brian “Head” Welch (Korn), Monte Pittman (Madonna’s longtime guitarist), John 5 (Marilyn Manson), and David Pack (Ambrosia). Cooper himself can be found teaching songwriting classes or playing ping pong with the teens, while Sheryl leads master dance classes, which they say they plan to continue doing.

Even though it’s uncertain when everything can get underway again, Cooper is maintaining a positive attitude. “I’m a glass-half-full kind of guy,” he says, explaining that he even sees some value in this current self-isolating reality: “This has forced families to sit in the same house together and maybe rediscover themselves. It’s almost like God saying, ‘Let’s take a time-out. How about you kids sit with your parents and watch TV, or play Monopoly.’ All the sudden, families are gelling together again because it’s like one for all and all for one against this disease. I think that’s, in some ways, a bit of a blessing.”

The Coopers are also positive that Solid Rock will survive these challenging times. “This is just a setback,” Cooper says. “We’re here, we’re not going away.” Sheryl seconds this reassurance: “We are in it for the long haul.”