Is Imagine Dragons the Worst Band Ever?

Home » News » Is Imagine Dragons the Worst Band Ever?

To listen to Imagine Dragons is to be a victim of circumstance—of algorithmic playlists, car radios, and other mediums where music becomes something to passively tolerate, rather than actively enjoy. Their bombastic facsimile of “alternative rock” is recognizably descended from history but safely free of innovation, engineered for institutions with high levels of visibility but low tolerances for risk. They are by definition the ideal accompaniment to a college football game, and so there they were as America turned its attention to the halftime show of Monday night’s championship game between Alabama and Clemson.

The halftime show, staged nearly 50 miles away from the game itself for the sole benefit of television viewers, was a medley performance with a major assist from pyrotechnics. From the top, Imagine Dragons frontman Dan Reynolds struggled to hit the appropriate notes, though an enthusiastic and definitely not planted crowd appeared not to notice. The most memorable part of the 10-minute show was not the live debut of a new version of their almost two-year-old song “Believer” featuring Lil Wayne, but instead the outfit Wayne chose for the occasion: 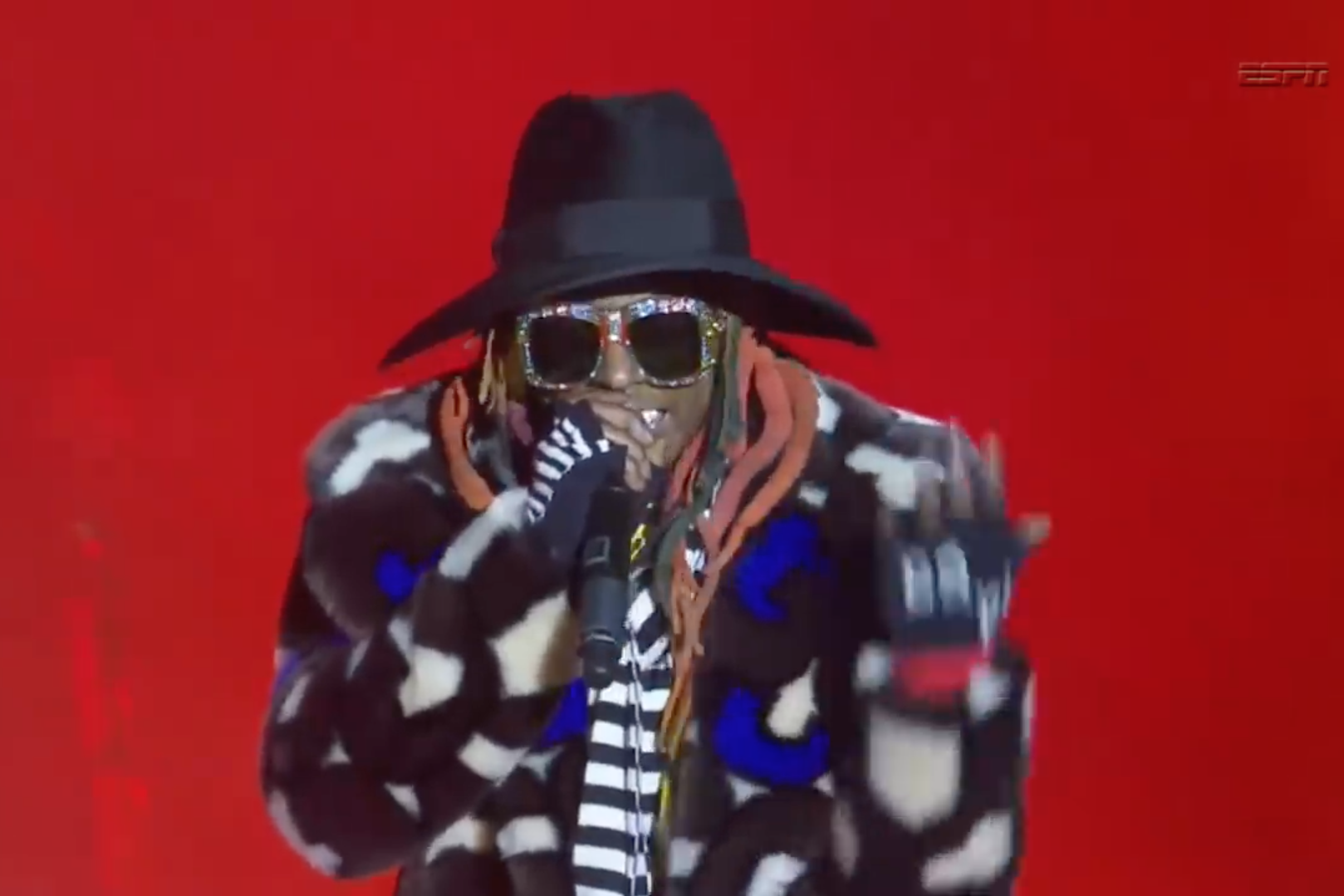 When you’ve been throughly upstaged by someone else’s jacket, consider that the problem might be you. This is a point so obvious it shouldn’t need arguing: Imagine Dragons’ music is aggressively unpleasant, and it’s only natural to grasp for something even louder to distract oneself. Enter Lil Wayne dressed like the Hamburgler in pirate boots.

It was not enough, because Imagine Dragons are somewhere far beyond terrible. Since 2012’s breakthrough “Radioactive,” dynamics have been their blunt-force instrument of choice, each new single crashing through the hyperreality of pop radio to pound another bland hook into a powerless public. Every song has the same punishing, squelching rhythmic force that likewise made Taylor Swift’s “…Ready For It?” sound ready-made for college football and dreadful to actually listen to. The lyrics, a composite of motivational platitudes and pseudo-dramatic yelps, barely merit repeating, if only because Reynolds seems so willing to do that himself. (The word “thunder” appears nearly 75 times in their song of the same name.) He stands at the center of this fake-deep circus, alternating at predictable intervals between his primary registers of “knockoff Chris Martin” and “screaming.”

Last night, the foremost defender of this insufferable band was Kentucky Governor Matt Bevin, whose cultural opinions include blaming zombie shows for gun violence and advocating the elimination of humanities degrees. Here’s his take:

Way to ruin an entertaining @Imaginedragons half-time concert with the weird rantings of a tired, has-been like @LilTunechi… One act still rising…The other, not so much…

Set aside the Wayne slander for the moment and consider the “still rising” part of Bevin’s tweet, which alludes to the real fallacy at work: that mass-market saturation is automatically equivalent to quality. Other, more garbage acts may toil in obscurity, but the reason Imagine Dragons’ artistic failings are striking is because their commercial success is so remarkable. They’ve scored a No. 1 album and three No. 2 albums, a streak otherwise unimaginable for a current ostensible “rock” group. Wherever mediocrity meets a massive budget—Suicide Squad soundtrack, Grammy for Best Rock Performance—there they are, howling into a wind tunnel aimed directly at your face.

Again and again in interviews, Imagine Dragons tout themselves as “genre-less,” an adventurous-sounding label that doubles as an escape hatch from narratives about being cheesy (as pop stars) or dinosaurs (as rock stars). This is advertising. Imagine Dragons haven’t liberated themselves from the boundaries of genre to pursue some unique muse heretofore unknown to iHeartRadio. They just happen to be a band who is succeeding wildly at a time when their peers are not because they aim specifically for rock music that doesn’t even need fans. It will exist in our lives regardless.

And there’s hardly a safer way to hold market share than being traditional enough to capitalize on the Recording Academy’s “recognizable young rock band” benefits plan (they were nominated for two more Grammys in 2018), yet flexible enough to bend wherever the whims of popularity dictate. If, by 2021, the hottest new musical commodity is dissonant noise that can’t be played outside a 10-foot range of a limited-edition Juul pod, Imagine Dragons will have discovered an exciting new way to connect directly with their biggest fans. There are no illusions here, no pretenses of craftsmanship or endearing foibles of personality. The circumstances demanded Imagine Dragons, and now we’re stuck.

Correction: Imagine Dragons were nominated for two additional Grammy Awards in 2018, which is last year. Spin regrets the error.