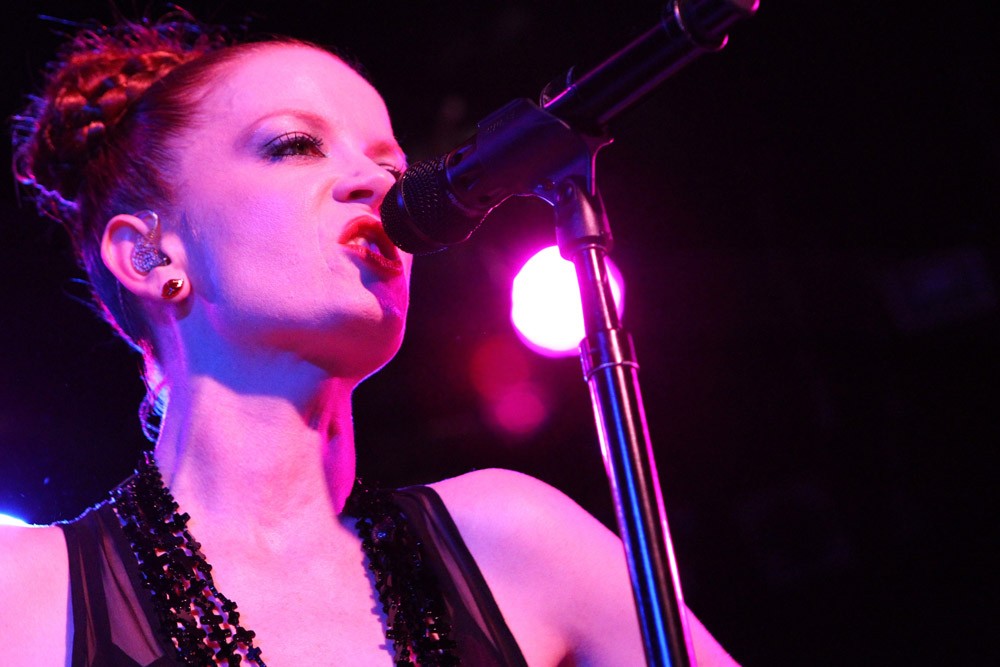 Shirley Manson has taken to miming. With her shock of crimson hair pulled into a bun, she declares in a proud brogue, “This is how I used to operate in the world.” She braces against an imaginary wall and shoves, to no avail. “Now, I’m like this.” She slowly pushes the wall six inches, beaming. “Forty-five years old ain’t so bad!”

Though fortitude is a quality most would associate with Garbage’s rebellious redhead, optimism not so much. Her band is about to release their first album in seven years, and Not Your Kind of People picks up from where the alt-’90s brooders left off. Sleaze. Gloom. Glam. Noise. Songs about beloved freaks and lying lovers. Grungy, trip-hop-addled pop designed to stoke the last dance at the end of days. There is one key distinction, however: Garbage are releasing their fifth LP themselves. It’s the most free they’ve felt since solidifying in 1994, when drummer Butch Vig — fresh off producing Nirvana’s Nevermind — and his pals Duke Erikson (guitar, bass, keys) and Steve Marker (guitar, keys), saw a Scottish songbird on MTV with her band Angelfish and knew, instantly, that Manson was their voice.

Manson once told an interviewer that she was afraid of happy people. “I still am,” she says. “Is that willful denial of reality or what?” But the band’s feisty frontwoman, whose most famous declaration is that she’s only happy when it rains, is hardly the misanthrope we remember. She’s begun acting, notably playing a shape-shifting android on Terminator: The Sarah Connor Chronicles, and she lives in Los Angeles, a city famously averse to precipitation. Which begs the question: Is Shirley Manson actually, maybe, just a little bit…happy? She takes a long pause, really mulls it over. “Yeah, I think I’m a happy person.” Then she affects a devilish grin to respond to a query we haven’t yet asked. “And yes, you should be very afraid.”

Well, how does it feel to be with the old band again?
It feels both spectacularly familiar and spectacularly weird. I mean, I never imagined I’d be the age I am and actually have the wherewithal to get my shit together, to pull up out of the mud. When you grind to a halt, to get going again takes a phenomenal amount of effort. To scratch your way up the ladder is hard enough when you’re starting out.

Was there any part of you that thought Garbage was over?
I knew we weren’t done. I’m surprised it took us this long to want to make a record again. For me, the spark came when I went to Coachella a couple of years ago. I felt like a lion in a cage. I wanted to chew through my bars. But we’d been the darlings for so long, and then suddenly we weren’t. I remember hearing the White Stripes’ [White Blood Cells] on iTunes in 2001. I clicked on it, heard 30 seconds, and bought it immediately. And then — honest to God — in my head, I was like, “That’s it. You’re fucked.” And I was right.

They were right at the cusp of a pretty big shift.
Them and the Strokes…they were coming from a completely opposite direction, and they blew everything else out of the water. Fair enough, but I knew we’d have to dig really deep to make a record that was going to be relevant in some way. We sounded tired and we were. We had been touring for a decade, living on a bus. We had no idea what was going on in the street, which I think is important for the kind of band we are.

You took up acting in the interim. Did doing something else help you clear your head?
Yeah, it was great to be in a beginner’s mind-set, to not have a clue about the rules, to be scared. On our last tour, in 2005, I would walk onstage and my blood pressure wouldn’t change. I wasn’t excited and that was so sad because it was something I’d loved so much. Inside, I was like, “This isn’t right. You have to stop. You’re going to make bad choices, make bad music.” All of us felt the same way and we just left in the middle of the tour.

You’d also been passed from label to label as the majors shifted and merged. It must’ve felt like you’d lost control of your own destiny.
That, and we signed with an indie because we shared that mentality, but then found ourselves on a massive label overnight [when Almo Sounds was sold to Universal in 2000, placing Garbage on Interscope]. And then you start to hear things from other artists about how the company feels about you. I don’t think the big labels understand that artists have each other’s back, because shit was reaching our ears that we never should’ve heard. The rot set in. We had to get off.

Does any part of you long for the industry of the ’90s — platinum sales, chart positions, big video budgets?
There is not one single shred in my entire body that misses that. And I’ll tell you this also, though I’m sad to say it: To see those fat cunts lose their jobs gave me an unbelievable sense of satisfaction. To know we’ve outlasted them makes me feel so victorious I don’t even know where to start. Because they treat you so well when the money’s pouring in — they’re up your fucking jacksie — but the minute things are not so sweet, you can’t even get them to pick up the phone. Now they’re getting a taste of their own medicine.

Then I don’t need to ask you if it feels good to go it alone?
It does, but it’s also stressful. We’d saved the money we made, put it all into an account because we knew one day we would need it, and it sat there for seven years untouched. We’ve now spent every penny to put this record out, so it’s scary, but that’s art, isn’t it?