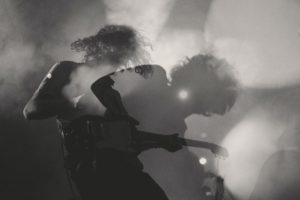 In the music industry there are numerous celebrities and legends, some of them are still relevant to the public, even though no new record has been released for years. Especially the entertainment industry benefits massively from this, but at the same time so do the fans, because they may even see their legends every day on TV, internet or live on location. This guide shows the greatest 8 rock legends that are still alive from all over the world.

Ozzy Osbourne cannot be missing from such a listing, of course, because he has been popular since the 1970s. His rise was vertical, hardly anyone else was more famous than him. However, his drug addiction caused various problems, among other things he was thrown out of his band – but this was not an obstacle for him and so he started a solo career.

Today Ozzy Osbbourne releases music only occasionally, his last album was Ordinary Man in 2020, before that he released the album “Scream” in 2010. He also earns his money by maintaining his own slot machine at gambling providers like Slotsia and made himself immortal.

He is the co-founder of the rock band The Cure of 1976, he has also been the frontman of the band since then. However, he participated in numerous other projects, although he did not to achieve fame like Ozzy Osbourne, he still counts among the legends. Currently, he participates in various songs, including “How Not To Drown” by Chvrches from 2021 – that was also his last participation until today.

The rock star Bob Dylan is the most influential musician of the 20th century and Nobel Prize winner, but just rock star from the 1960s. However, he changed his musical direction again and again in the course of his career, among other things he also published songs and albums in the field of gospel, blues and country. However, everyone continues to associate Bob Dylan with his rock songs.

Everyone knows Morrissey (short: Moz) because of his likability factor, hardly any other rock star has left such a sympathetic impression on the public. His provocative lyrics are mainly about ambiguous sexuality and animal rights. He is very well known for his self-irony, but also for his cynicism. He reached his legend status with “The Smiths”, whose formation happened in 1982.

The Rolling Stones are legendary and so is Mick Jagger. Today he is the honorary president of the University of London and the namesake of a species of hippopotamus, but at the same time he continues to be remembered for his extremely controversial activities. He is said to have snorted his father’s ashes with cocaine and to have carried out other various “activities”, which ultimately also cost him sympathies at the time.

If you are interested in rock music, you also know King Buzzo. He is the most influential rock musician in the world. Since 1987, he has already released over 20 albums and has been touring the world almost without interruption ever since. When his bandmates take a break, he simply continues as a solo musician – he has thus played every country more often and because of his passion he is a musician through and through. There is hardly anyone who is so committed to his hobby.

Tom Waits is one of the few who manage to mix rock music with other genres, including blues, jazz and avant-garde. This shows his creativity and passion for combining things. Since the mid-1980s, the concept has worked brilliantly.

Dave Grohl is one of the names of the band Nirvana. The band suffered a sad fate, at that time Kurt Cobain began suicide due to severe depression. As a result, Dave Grohl formed the band Foo Fighters, while the third Krist Novoselic had rather avoided the limelight. The Foo Fighters, however, developed into one of the biggest rock bands. Fans of Nirvana were happy that a kind of monument was thus created.

Certain rock musicians have not been alive for several years, but through their life’s work they continue to shape music today. Numerous cover bands also show how highly regarded these musicians still are. These include John Lennon, Jimi Hendrix, Jon Lord and the previously mentioned Kurt Cobain.

A rebel and genius in equal measure, Jimi Hendrix’s electric guitar sounds are still legendary today and are even played in the background of new songs. One of his great performances was in 1969, when his band “Gypsy Sun & Rainbows” played a controversial version of the US national anthem.

He made a name for himself mainly because of his performances, among other things he regularly smashed his guitar at the end of the concert or set it on fire. Due to a drug cocktail, however, Jimi Hendrix did not live past the age of 27. He was found lifeless on September 18, 1970. According to the autopsy results, he consumed alcohol and sleeping pills together and choked on his vomit during the night.

Jon Lord made rock history with his hits and continues to be fondly remembered by his fans and by fans of rock music. He shaped the band Deep Purple sound. Possibly due to pancreatic cancer, Jon Lord passed away in 2012.

The singer of the band Nirvana, like Jimi Hendrix, died at the age of 27. He released the song “Nevermind” with his band, this is considered one of the most important releases in music history. This was followed by worldwide fame, but Kurt Cobain could not cope with it, so he took refuge in drugs.

His depression finally led to suicide on April 5, 1994 in his home. He had left a suicide note in which he quoted the song “My, My, Hey, Hey” by Neil Young: “It’s better to burn out than to fade away”.

John Lennon gained worldwide fame along with Paul McCartney for writing songs for their British rock band, The Beatles, which stormed the charts worldwide. He was both the singer, guitarist and co-founder of the band. Later, however, it was in disbandment, he devoted himself during this time to activism for world peace. Artistically, he developed in other genres, his solo releases include Imagine (1971). In December 1980, however, John Lennon was shot during an assassination attempt in New York, who was subsequently given a life sentence. As with any major assassination, however, there are various conspiracy theories.