The future of these blues clubs is at a crossroads

Ten years ago, some buddies and I made a film called We Juke Up in Here. It was an insiders’ journey into the underbelly of Mississippi’s surviving juke joint culture. Three years later, The New York Times showed up on my doorstep. “How many such places still exist?” the reporter asked.

I gave them the list to visit in a three-state region, centered by Mississippi. And they did. The Great Migration In Reverse

In the early 1990s, I often took a cheap Southwest Airlines flight from my native Dayton, Ohio to Chicago in search of down-home blues venues like Lee’s Unleaded and Rosa’s. Then, in 1995, my advertising career moved me to St. Louis. A year later, I was sitting in Junior’s Place — a rural juke joint in Chulahoma, Mississippi, a.k.a. the middle of nowhere. And my life was changed.

Old bluesmen, young bluesmen. Folk art on the walls, moonshine in plastic jugs. And a local African American audience bursting from an ancient structure clearly built without the aid of an architect. That was Junior’s (which burned down in 2000).

It was like walking into a history book. And it finally hit me: Blues music wasn’t just the genre that spawned rock ’n roll. It was the voice of a culture, the soundtrack of a people. And it was most comfortable in a juke joint.

In 2002, I left my St. Louis advertising career and moved to Clarksdale, Mississippi, to open my Cat Head blues store and begin a mission to help “organize and promote the blues from within.” I traded my Mad Men life for the juke joint life. What Is A Juke Joint, Anyway?

In my book, Mississippi Juke Joint Confidential, I describe juke joints this way:

Every juke joint is a blues club, but not every blues club is a juke joint. If you’re chomping down on a bacon cheeseburger at a House of Blues as you read this chapter, you are most definitely not sitting in a juke joint. The true juke joint, like true blues music, comes from the African American culture of the Old South, most famously Mississippi. A juke joint is basically a house party where the juke host doesn’t trust you to come to his (or her) actual house, so he has a little “home away from home” building that is either out in the countryside or “on the other side of the tracks.” In the old days, such juke joints would have been awash with moonshine and gambling on the weekends. Low lights, cigarette smoke and a lack of cameras would have obscured the goings-on, keeping the blues parties just like Vegas. What happened there, stayed there. As self-proclaimed “King of the Juke Joint Runners,” Clarksdale’s Red Paden of Red’s Lounge, often says, “There used to be lots of cuttin’ and shootin’. Now? It’s like going to church.”

Such jukes used to dot the countryside in places like Mississippi, and the larger Delta towns often had streets or neighborhoods dedicated to them — a bit like miniature Beale or Bourbon Streets. After a long week of tough fieldwork on the cotton plantations, workers would blow off steam at rural and urban jukes alike. Blues music was the music. That and gospel — but gospel wouldn’t come till Sunday morning. Saturday night was for jukin’.

As late-great Clarksdale bluesman Wesley “Junebug” Jefferson once explained to me, “A juke joint doesn’t have any special rules like a club would. You can go back to the cave days, and they had some little stomping ground, so it’s a traditional thing. Some people want to hear something that’s way back there.” So, What The Hell Happened?

Do you listen to your grandparents’ music? Most of us don’t. Same goes for folks in the South, where their music might make you think of sharecropping and segregation. As Red told me, “We used to play a lot of that downhome blues, but nowadays things have changed to where most of the Blacks don’t want to listen to that. It’s a new generation now. We’re going through a period of changes.”

Indeed, when thinking about the current state of juke joints — the buildings, the music, the culture — I think of Red’s in Clarksdale.

Sure, the other jukes on that list I gave our friends at The New York Times tell part of the story. The Blue Front Cafe in Bentonia, Mississippi, is the oldest continuously operating juke we know of (even if live music there is occasional at best), and Gip’s Place in Bessemer, Alabama, definitely had the oldest owner (Gip passed away well into his 90s in 2019). Teddy’s Juke Joint in Zachary, Louisiana, may well be the friendliest (though mostly about its extremely colorful owner spinning discs these days), and Po Monkey’s Lounge was certainly the most celebrated juke joint ever (spawning a coffee table book and Annie Leibovitz photoshoot, before its owner passed in 2016).

But Red’s? It’s the barometer. It’s the one that sheds the most light on the state of jukes today and, perhaps, blues overall. 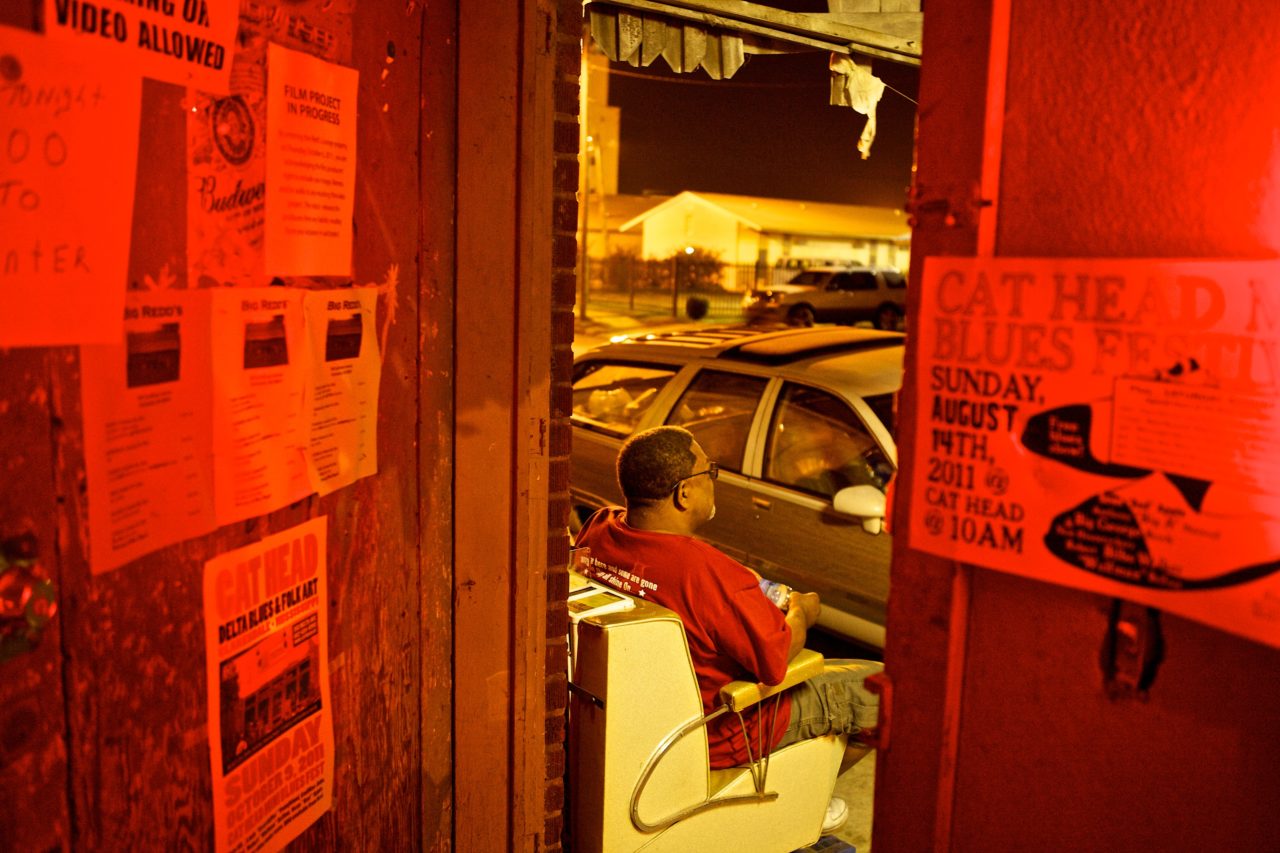 Red Paden is a bluesman. When disco came in, he let his partners spin a few records. It helped sell some beers and pay the bills. But Red never gave up on live blues. As his aging black customers started staying home more, choosing the lord’s music over the devil’s (still a thing here) or dropping their expendable income at the burgeoning casino scene in nearby Tunica, Red’s live blues shows got thinner and thinner. For the first time in nearly 100 years, there wasn’t a “next generation” of fans coming up in his neighborhood. The “kids today” wanted hip-hop and modern R&B, preferably from a deejay or their own bass-heavy car stereos.

When I moved here in 2002, it took a full two weeks before there was a live blues show at Red’s. Today? Well, pre-COVID-19, Red had worked his way up to four nights a week — every week — year-round. And Clarksdale, overall? Seven nights a week, 365 nights a year.

What a difference two decades make. During the day, tourists visit the Delta Blues Museum or drive out to the countryside in search of official Mississippi Blues Trail markers. At night, local clubs and jukes are filled with live blues bands and audiences from all around the world. By making live blues consistent and reliable, Clarksdale has provided fresh hope for young musicians and old jukes alike.

In 2004, we founded the Juke Joint Festival in Clarksdale — an annual tribute to these legendary homes of the blues and, we hoped, a mechanism for their survival. The festival is now our town’s largest annual event, helping venues and musicians reach a broader audience. By 2016, the fest was attracting attendees from 28 foreign countries and 46 U.S. states. By 2019, it included 13 daytime stages, 22 nighttime venues and over 100 blues acts.

Of course, 2020’s festival was canceled by COVID-19 and replaced with a quickly cobbled together virtual live-stream event. So, circling back to the big question: How many live blues juke joints are left in 2021? Honestly, we don’t know yet. Filming 'We Juke Up in Here' at Blue Front Cafe CREDIT: Lou Bopp

A King Waits To Plug Back In

These days, Red Paden’s head is exploding with “Corona” hair and beard. He’s exchanged shots of moonshine for dialysis treatments; live blues for TV sports. He’s still quick to make a joke; quick to call bullshit. And he’s always happy to reminisce about his fallen blues friends with colorful names like “T-Model,” “Bilbo” or “Wolfman.”

He’s also eagerly awaiting the day he can again call blues friends like “Harmonica” Bean and “Gearshifter” Youngblood to come plug back in.

Recently, he asked me, “You gonna take the shot?” “Hell yeah. I’ll be the first in line for the vaccine,” I said. Without missing a beat, he responded, “Well, I’ll let you take it first!”