Jonathan Richman and the Modern Lovers was like some love affairs: passion, pain, and then a bad breakup. A reissue of their first few albums brings back memories of a band that could have been the biggest of the '70s if it had only survived Jonathan.

This article originally appeared in the June 1986 issue of SPIN.

Jonathan Richman is the Mr. Rogers of Rock, the Grandma Moses of Pop Music, the Walt Whitman of Wimp, a wholesome Lou Reed, and a hopeless romantic. His band, the Modern Lovers, were legends before anyone had heard of them. They could have been the biggest band of the ’70s. They were probably the first art band, preceding the Talking Heads by a number of years.

They were a new-wave band long before punk was a musical term. While everyone else back then was going to extremes to be outrageous, the Modern Lovers bent over backwards to be normal. While everybody else was into glitter, makeup, and platform shoes, the Modern Lovers wore T-shirts, so you could see from their arms the kind of work they did; short hair, so you could see their faces; and sneakers (they were just as tall as they appeared).

Despite, or perhaps because of, their eccentricities, the Modern Lovers became the darlings of rock critics and trendsetters. Record companies begged to sign them.

Perhaps they were too virtuous, too straight, too old world, or too modern, but when the opportunity came knocking at their door, they tried to sneak out the back. They did everything they could not to succeed, and finally, as if to guarantee failure, they did the only thing left—they broke up.

There are three people on the other lines at the bank and on Jonathan’s there’s eleven, but that’s fine, ’cause Jonathan’s in heaven. He’s got a crush on the new teller.

Jonathan, Jonathan, when you walk into the Museum of Fine Arts, in Boston, where do you go first?

How do you spell that?

“That’s what he wanted. A girlfriend. Someone he could share his dreams with. Jonathan was one of those kids who was totally in his own world. He did not know how to talk to girls. He put them up on a pedestal. He’d visit girls up on the astral plane and visit them at night. Some of the girls he intercepts up there he may have known from other lives.”

“No, Jonathan, that’s wrong. You shouldn’t have done that.”

Before he was a Modern Lover, Jonathan was frustrated. Big dreams. No friends. He grew up in Natick, a Boston suburb, dropped out of high school at 16, moved to New York City at 18, worked as a Wall Street messenger and as a busboy at Max’s Kansas City, hung out at Lou Reed’s house, moved back to Boston. 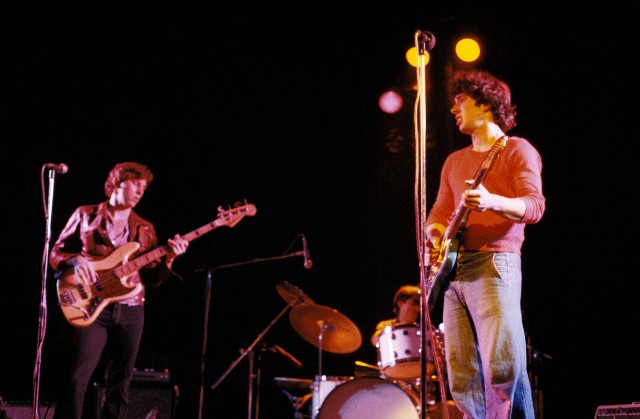 David Robinson, drums: I saw Jonathan for the first time, like everybody else, in Cambridge Common, at the Sunday afternoon free concerts, in 1970. Jonathan wore a white plastic Harley-Davidson motorcycle jacket. That was his trademark. People would say, did you see that crazy guy with the white plastic jacket? They’d introduce him as Young Johnny Richman and he’d come out and everybody would laugh, boo, and mostly ignore him.

He was terrible, but he was also aggressive and wild compared to what else was going on then. A few weeks later he walked into the record store where I was working, with a little 3″ x 5″ card advertising a band. He decided right then that I’d be the drummer.

Jonathan didn’t have a standard voice. He just wanted to show the world that anyone could do it. All you had to have was feeling. People thought it took courage to perform alone when you couldn’t sing and only knew two chords on the guitar, but it didn’t take courage. It was something Jonathan wanted to do so bad, no one could have stopped him.

Ernie Brooks, bass: It must have been in the winter of ’72 that scenemaker Danny Fields brought New York Post rock critic Lilian Roxon to the Speakeasy in Cambridge to hear us play. The Modern Lovers were a little Boston band when her article appeared and suddenly all the record companies wanted to take us to dinner. Warner Brothers flew us to California to make an album. We went into the studio in Burbank and played all our songs. It was a little test, just a demo tape, but it was the only recording we ever finished. Years later it ended up becoming our first album.

Jerry Harrison, keyboards: When we got back to Boston, we tried, through the summer of 1972 and into 1973, to decide what to do with all the offers. We were deciding between Danny Fields; working with Steve Paul; David Geffen with A&M; and then Warner Brothers, who flew in a whole raft of managers. We had a huge basement in Arlington where we rehearsed, so we brought them all back there. David’s father owned a liquor store, so he got some liquor and we had an amazing concert. The managers thought we were fantastic.

We interviewed each one for hours. We asked them what books they read and what they thought about this and that, but what we were really asking was what their morality was. We thought of ourselves as a cause and we didn’t want to be ruined by something we thought would take away the purity of what we were doing. Meanwhile, we were destitudinally broke. We lived off record company dinners, which were once or twice a week. Once in a while, Jonathan’s parents would visit. His father, who sold beef to army bases, brought along huge packages of Table Top pies and his mom brought a big fluffy sweater, which Jonathan had to put on. 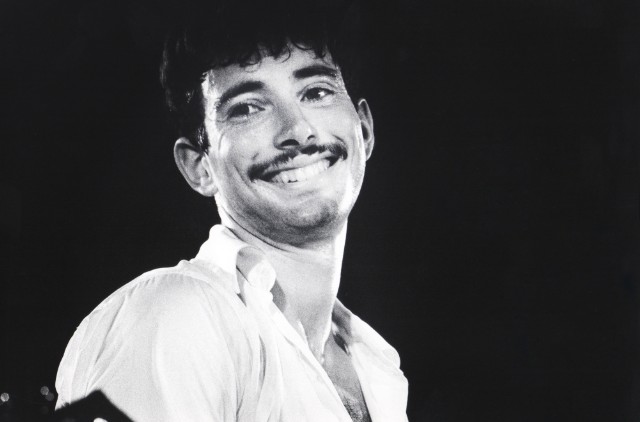 Jonathan, Jonathan. I want to know something. Have you ever been to Bermuda?

Yeah, my band once played down there.

The Modern Lovers had a friend whose cousin was the musical director at the Inverurie Hotel. They alternated with the Esso Steel Band and the Fiery Limbo Dancers, who’d do the limbo with flaming sticks and rolled around on broken glass. Every time the Modern Lovers played, they drove the tourists out.

Something in the air that kept soothing me down, making me feel better all around.

What did you see?

I saw how stiff I was and I changed it just because. I realized how stiff I’d been and I didn’t want to be like that again, in Bermuda.

Miss Christine, of Frank Zappa’s group Girls Together Outrageoously (G.T.O.s), was found dead this morning in the quiet seacoast town, where she was a house-guest of the Modern Lovers. Ernie Brooks III had gone to great lengths to rent the Victorian house, with garden and tennis court, from an ambassador who made him promise the band would behave and not use drugs, a promise the band maintained. Miss Christine, who had flown in from L.A., apparently with a pharmacy of drugs, overdosed her first night there. Within a week, the band had to move out.

Jerry: We moved back to Boston and eventually signed with Warner Brothers. Warner had a reputation for being able to take on new and unusual acts and also rock ‘n’ roll acts. At that time A&M was doing Cat Stevens. That summer, 1973, we drove to California, to move there because John Cale, who was to produce us, couldn’t leave his psychiatrist.

When we got to California, we moved into Emmylou Harris’s house in Van Nuys, which Warners had found for us. Almost as soon as we got there, things began to fall apart.

Ernie: John Cale kept trying to get Jonathan to play violently. He’d shout, “Jonathan, attack! Attack!” But Jonathan didn’t want to be mean, he wanted to be nice. Cale got into a big fight with Jonathan. We thought, “We got this far with this sound, why change it now?”

Maybe Jonathan was growing up, but as far as we were concerned, this was causing problems with his music. We were still trying to do the old songs, “Roadrunner,” “Modern World,” “I’m Straight,” and Jonathan was trying to sweeten them up to make them more acoustic. Around that time he wrote “Government Center,” and “Hey There, Little Insect.”

Anyway we started having these fights in the studio. Cale wanted to produce the Modern Lovers that he had heard eight months earlier. Then Kim Fowley cam around. He had a lot of dumb enthusiasm for the new songs. “Make it teenage,” he’d yell from the control room. There was no argument between Jonathan and Kim, the new producer. But we ended up not being that satisfied with the stuff we did with him.

Johnny Rotten: I don’t listen to music. I hate all music.

Interviewer: Not one favorite song?

Lou Reed: I created Jonathan. But I won’t be responsible, like I did it on purpose. No way. Like, Jonathan said if I bad-mouth him it would be OK because I only bad-mouth people I like. “Pablo Picasso, No On Ever Called Him an Asshole,” I love it. “I’m Straight,” that’s incredible.

One of my big mistakes was turning him on to Alice Baily, that’s where that insect song comes from. I said, “Do you know, Jonathan, that insects are a manifestation of negative ego thoughts? That’s on page 114.” So he got that. That’s a dangerous set of books. That’s why Billy Name locked himself in his darkroom at Andy Warhol’s Factory for five months.

David: Jonathan was obsessed and we couldn’t talk him out of it. He wanted to play acoustic on street corners and at rest homes, and I was supposed to play a rolled-up newspaper by banging it against my fist. I was the first to leave. 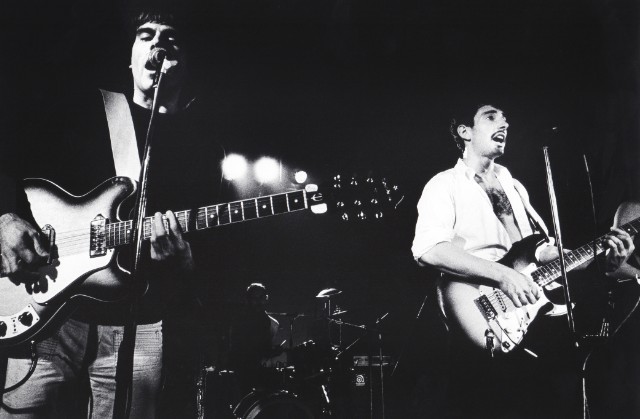 “The band has to learn volume and how to play softer. At this stage, infants wouldn’t like us because we hurt their little ears and I believe that any group that would hurt the ears of infants—and this is no joke—sucks.” —Jonathan Richman, 1973.

Ernie: Meanwhile, Warners was calling up every day to find out whether we had a manager yet and what was going on with the recording. Jonathan would tell the person from Warners we would finish the record, but when we were on tour we wouldn’t play any of the songs that were going to be on the album.

Of course what a record company wants, if they’re going to put money into an album, is for the band to play the songs on the tour and help sell the album. Jonathan would tell the record company something that was calculated to upset them. Warners terminated our contract, and in ’74, the band broke up.

Thirteen years later, Rhino records, through Capital, is reissuing the Modern Lovers’ first albums. David Robinson is in the Cars, Jerry Harrison’s in Talking Heads, and Ernie Brooks plays in a lot of New York bands on the fringes of what’s called the “new music” scene.

There have been many other Modern Lovers, but Jonathan’s still Jonathan, singing songs like “Chewing Gum Wrapper,” “My Jeans,” and “Vincent Van Gogh” (“The baddest painter since Jan Vermeer”).

He has a new album, It’s Time For Jonathan Richman, on Upside Records. He would like his records to be stocked in the international section, next to Charles Aznavour and Maurice Chevalier. 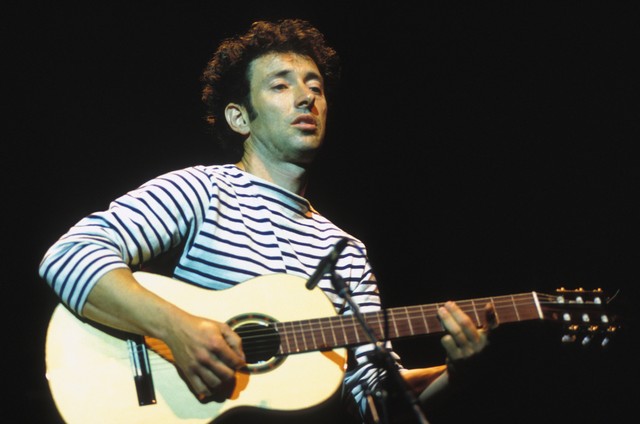 Ernie: In retrospect, I think Jonathan was right. Maybe we were just too uptight. We were into being in this cool rock ‘n’ roll band, and going “buzz, buzz” in the background of this cute little insect song (“Hey There, Little Insect”) didn’t fit the image we had of ourselves.

Maybe we should have followed him into his vision a little more.