When the Meat Puppets sing about being "Out My Way," there's no telling what planet they're coming from.

This article originally appeared in the August 1986 issue of SPIN.

My friend, a long-haired New York University student into SST bands, tells me the Meat Puppets are like the Grateful Dead, only on a level higher, more evolved. He hangs out with the DJs from the college radio station, so I guess that means he knows.

I bring home all four of the Meat Puppets records to find out. They are country/psychedelic/hardcore, the kind of young while American hybrid that lends itself well to lengthy, detailed dissection in print. The Meat Puppets give good column inch. Their sound is complicated, at first inaccessible, hazy from sitting too long in the sun. When I put on Meat Puppets II (as in Led Zeppelin II), my roommate, who also has long hair but is a total headbanger, just doesn’t understand. He sulks in the kitchen, wondering why he can’t play Celtic Frost.

Just when I’m starting to dig the laid-back southern-rock guitar noodling on “We’re Here,” he goes over to the turntable and takes hold of the vinyl like a scratch DJ. Big ugly squawks leap out of the speakers. “I thought they were a hardcore band,” he says. “Look! It’s produced by Spot. He sure didn’t ruin St. Vitus’s records.” I guess Robert won’t be seeing them with me at the World tonight.

The Meat Puppets are no big deal. If you want to talk to the Meat Puppets, you talk to the Meat Puppets. They have no personal assistants, valets, right-hand men, flunkies, or social secretaries. You have to call their booking agent only if they’re on the road, which they are right now. They’re driving around the country in a van pulling a U-Haul with all their equipment, which they loaded themselves, like gypsies. When they’re on the road, they never have a number where they can be reached.

This is the sixth tour in four years that the Meat Puppets have done SST style. They take turns driving and sleeping in the back. They take turns bugging the club managers for more beer. Derrick Bostrom, their drummer, sells T-shirts before and after the show. They’ve established a network of sofas in every town, the underground music railroad.

Guitarist Curt Kirkwood says he sometimes has the most fun just driving down the road when everyone’s asleep. They’d like to sign with a major label, which would mean at least enough money for a driver. Now that Hüsker Dü and the Replacements have done it, the Meat Puppets seem next in line for such a development. But for now they’re enjoying their freedom.

“When we work, we really work,” says Curt. They travel with only one sound man because they make more money that way. “We tour for 30 days straight, then when we go home we can afford to sit around for three months.” Home is in Phoenix, Arizona, where Curt’s girlfriend takes care of their twins, age two and a half. “Don’t say she’s my wife,” says Curt. “She was married before and won’t like it.” 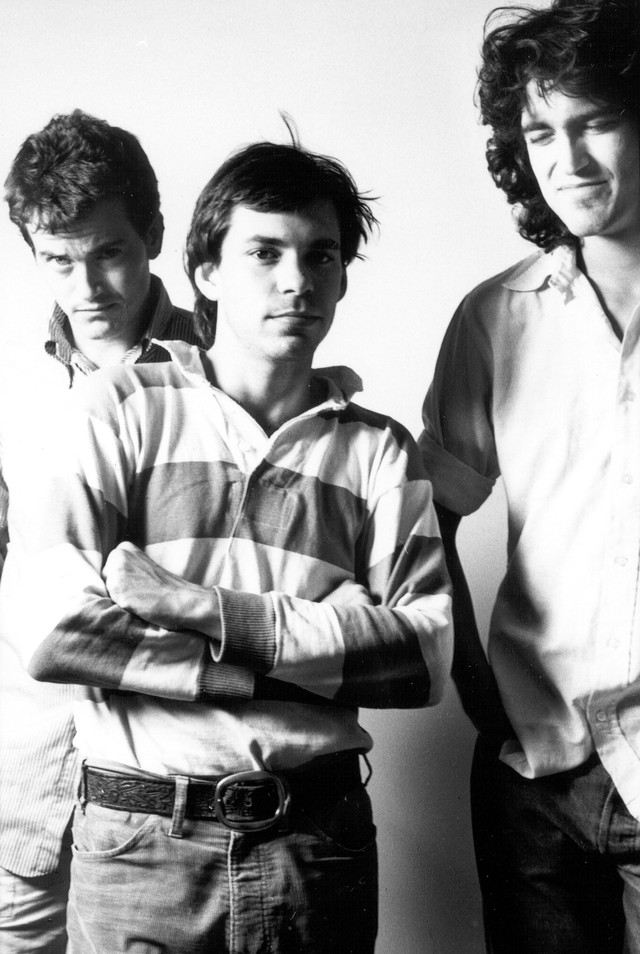 After the show in New York, the band goes to a diner. It is 3:30 AM; now they have to drive to Boston for an all-ages show at 4 in the afternoon. Soft rock wafts through the air from concealed speakers: “Last night I didn’t get to sleep at all. No, no…”

“I’ll have 15 loaves of baked lard,” Cris tells the waitress.

“I’ll take the kielbasa,” says Curt. “Do you mind if we clim up on the counter and do a few numbers?”

“I don’t have too much of a life story,” Cris tells me.

“Everyone has a life story,” I say.

“Well, I was born in Wichita Falls, Kansas,” says Curt. “Moved to Phoenix when my mom married a horse trainer. I lived an incredibly suppressed, boring existence, except when I got to ride my motorcycle. When I was 17, I started trying to form rock bands. When I was 18, I  formed one called Keilee, which means warrior in Apache. It wasn’t my idea. All the other guys in the band were Chicanos.”

“He was the only white bread in the group,” says Cris.

“Yeah, I lived with a lot of Mexicans,” says Curt. “My father is into computers. He was gone most of the time since I was three and a half. Mother is working on her sixth marriage. Father was her second, he’s got two other kids. My stepfather is some kind of jerk. I think Mother got married last Saturday.”

“Our next rock band was called Granite Reef. We did Lynyrd Skynyrd, Doobie Brothers, and Steely Dan covers. But then everyone started becoming incredibly trendy.”

“Thanks to new wave and all that crap,” says Cris.

“Derrick likes baseball,” says Cris. “I think he’s a Mets fan. Today we mentioned seeing a live sex show, and Derrick says, ‘The hell with that, where are the live nude Mets?'”

“I told Richard Grabel [a journalist from Creem] that I had a monorail in my backyard,” says Curt. “But what I didn’t tell Richard…”

“…is that hamsters are fruit and so are children.”

“And what led you to this conclusion about hamsters?” I ask.

“They grow on trees, they ripen, you squeeze and bake them into pies, or peel and eat them as a snack.”

“What about children?” I ask.

It is going to be a long drive to Boston. “So is it true,” I ask, “that you started your musical career playing in a basement and smoking pot?”

“Yeah, that was some horrible house,” says Cris. “It rivals anything you have here, except the South Bronx.”

“Derrick’s mom gave us the guest house,” says Curt. “It was her soon-to-be-ex-husband’s. We spit all over the walls. We’d whack flies with a rolled-up newspaper, and they were all over with our big black louggies. We’d turn the lights out and throw appliances at each other.”

“I haven’t calmed down,” says Cris. “I’ve gotten worse. Nobody likes me. They all used to like me.” 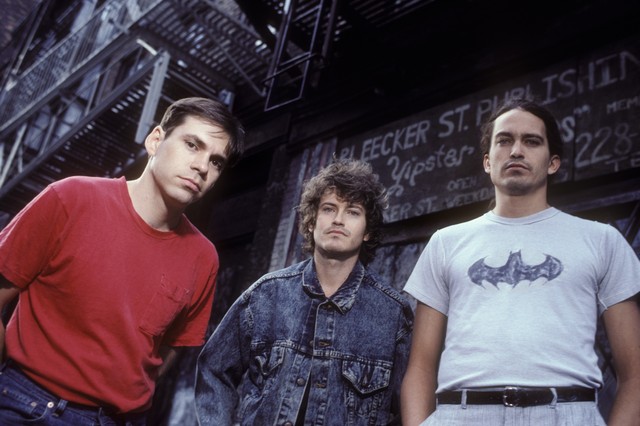 By 11:30 AM the Meat Puppets are in Boston. Curt has driven the whole way.They stop to call a friend, then go to his house. Without pausing to shower, eat, or undress, Curt immediately falls asleep on the living room floor. In three and a half hours they have a sound check.

It occurs to me that this type of schedule affects what they put onstage. By showtime at the Paradise, 5 o’clock, they are dizzy and wired. The college kids in the audience slam dance without the encouragement of alcohol, bouncing even through a slow song like the Everly Brothers’ “All I Have to Do Is Dream,” overlooking the vocal harmonies that wander off-key. When Curt looks most strained, after the fifth or sixth song, they shout, “Turn up the guitar!” A second wind enters him, and it’s full speed ahead.

Later, back at their friend’s house, Curt says he reached a point where “I realized I was there to entertain those people. What’s really important to me is that point onstage when there’s just utter chaos. The whole room feels like it’s taking off, and everyone in the room knows it.”

“A couple of times, I can’t remember what song, but I almost fainted at one point. I was in another world, and I kept on playing, and I knew it wasn’t me. It was something being projected at me. I came pretty close to passing out twice…partial excretion, partial excitement. It’s the smoothest, grooviest feeling. The best rock ‘n’ roll reminds me of teenagers on angel dust fucking.”

“We’re the underbelly of rock ‘n’ roll. We’re not like the Replacements. We rely a lot more on musical diversity. But I guess you could compare it to the Replacements in that they try to be idiots.”

“We are human idiots; we act like buffoons. We don’t have to smoke dope or drink alcohol to do that. We get messed up with just our own thoughts. We use our proficiency with the instruments to rake people’s brains over the coals. We’re not really employable in other professions. We’ve all gone through such bitter head trips that we make great artists.”