His book 'The Decade That Rocked' is the ultimate visual record of the hairiest decade...

Go to absolutely any of the near-400 pages of The Decade That Rocked —the new coffee-table-worthy collection—and you’re sure to find one of the most vibrant, iconic images of all time, every time. That’s because Mark “WEISSGUY” Weiss (as he likes to call himself) was the photographer behind some of those legendary moments. From the zaniest Ozzy Circus covers to Van Halen’s electric prime, from Aerosmith and Guns N’ Roses to Alice Cooper and Dee Snider at their most outrageous best. AC/DC, Mötley Crüe, Iron Maiden, Judas Priest. Bon Jovi, Danzig, Whitesnake, KISS. Skid Row, Cinderella, Ratt, Dokken — all that hair! — Peter Frampton, Led Zeppelin, Blondie and everyone else you ever wanted to meet, and those you were happy to admire from afar, all in one place.

Since its June release, The Decade That Rocked is now in its third printing. On October 30th, the closing event for Weiss’s exhibition at the Monmouth Museum in Lincroft, New Jersey included the photographer himself dressing up—and performing—like one of his subjects: Alice Cooper. Dee Snider and Don Dokken made an appearance, too.

We spoke with Weiss about what it was like to, well, to be him. 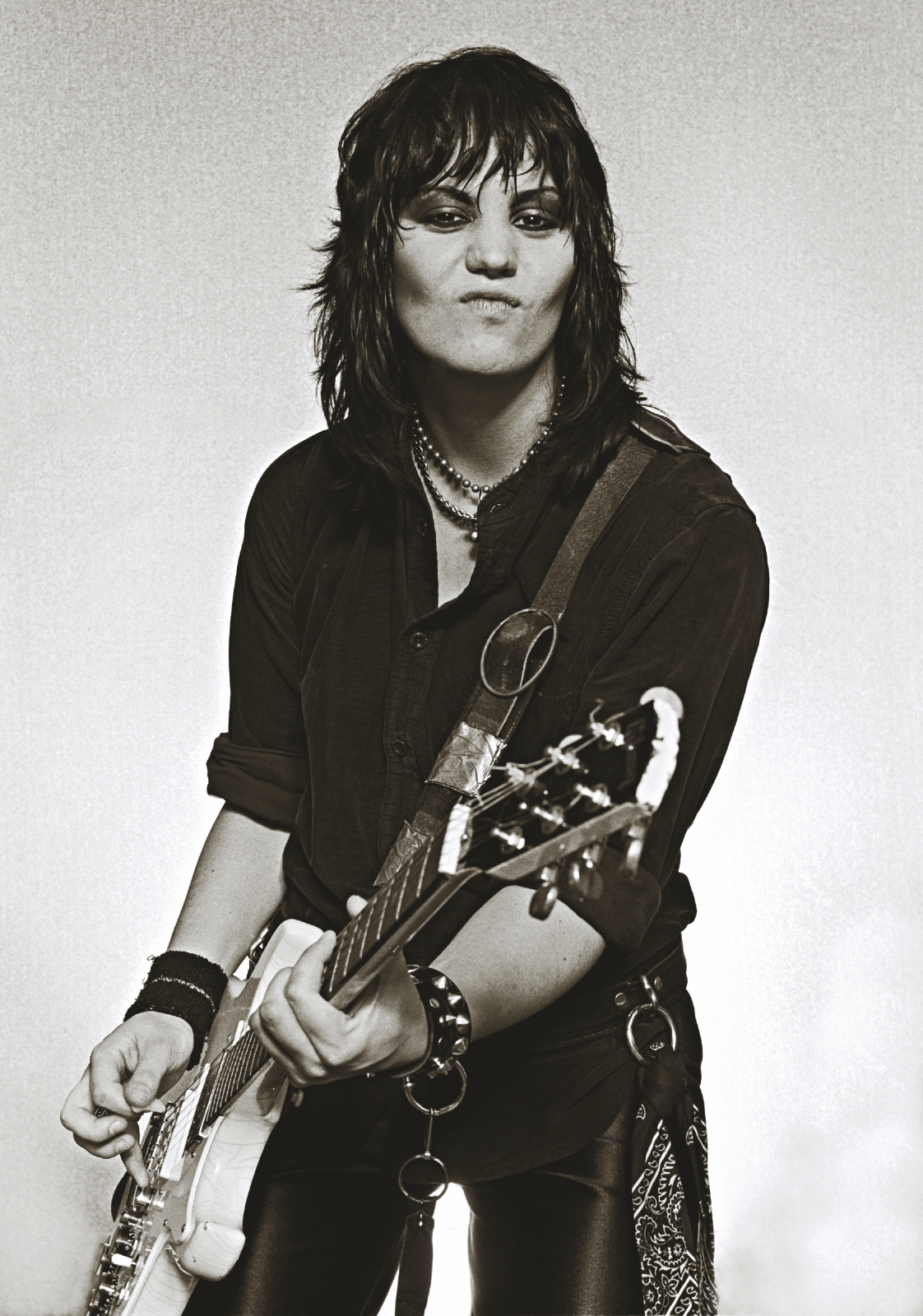 Was choosing images hard to do?
The first hard part was to say, “Okay, I’m going to do this book.” The next hard part was to figure out what photographs I would have to leave out. I designed, along with the art director, a 600-page book that was supposed to be 300 pages. I began with the early years, setting the stage for a decade that would change my life.

I loved the flash and glitz of the ‘70s: Bowie, Queen, Aerosmith, Led Zeppelin, KISS and Alice Cooper were my musical influences, which inspired my vision when coming into my own in the ‘80s. As I completed each chapter I realized my photographs were telling a musical tale. All I needed to do was connect the dots — or in my case, the photos. I then went back to tell the stories. The whole thing took five years to complete.

When I first took the photographs, it was such a whirlwind of excitement, with countless people being quickly whisked into my life. I honestly didn’t get to appreciate my photographs then like I do now.

How do you think digital cameras have changed rock photography?
In the ‘70s and ‘80s, when you saw a photograph on an album cover or in a rock magazine, it was an experience. The photographs were magical, there was imagination. A photo in a magazine was a moment caught in time. You had 36 tries (exposures) to get your picture before you had to put in another roll of film. So, each time you clicked the shutter there was thought put into it — was that click-worthy of the photo? As opposed to today, when you shoot hundreds, if not thousands of photos with your digital camera. Rock photography has not changed but becoming a “rock photographer” is definitely not what it used to be. That said, digital cameras didn’t change rock photography—people did. Because it’s so accessible to anyone with a phone (which is basically everyone), we all have the opportunity to become a photographer. I always encourage young photographers to find a band you like and take photos of them and grow with them. Be creative and make friends and you can’t go wrong.

Do you have a favorite Ozzy cover?
Circus asked me to shoot the cover of their 13th anniversary issue. They asked if I had any ideas, and immediately I thought of Ozzy.

Earlier in the year, Ozzy had bitten the head off a live bat onstage, which landed him in the hospital to get rabies shots. So, I had a flag made with a picture of a bat on it and arranged for him to hold it while popping out of a cake. When I arrived at Ozzy’s, the housekeeper told me to set up in the garage. Once I was ready to go, I waited. And waited. Several hours went by. Then Sharon came out with a concerned look on her face. “Ozzy shaved his head last night.” I must have looked like I had seen a ghost. I thought to myself, I’m done. Circus will be pissed at me for spending all this money on the shoot and returning without a cover. Then Sharon gave me that Sharon smile and said, “But he’s gonna do it.”

We put our heads together and came up with an idea. Sharon took out some black makeup and began applying it. Then, I taped a couple of black balloons I had for the birthday theme to his head. I knew then that we were off to a lifelong adventure of shenanigans.

Who was one of the nicest rock stars you ever worked with?
I would have to say the late, great Ronnie James Dio.

Was there a shoot that went terribly wrong — but the photos came out amazing anyway?
That would be Danzig. Not that it went terribly wrong, it just wasn’t fun. That was the first and only band I didn’t connect with. When the Danzig guys came to my studio, they weren’t exactly the friendliest bunch. There was no talking, no kidding around, no small talk. It was apparent they either really didn’t like having their picture taken . . . or they just didn’t like me. Either way, I had a job to do. I needed to produce a great band shot to be used as a gatefold photo in their album. If they wanted to be tough guys, I decided I’d just make them look like the toughest guys out there.

First, I arranged the members so that Glenn was the main person in the frame. A band photo is like a puzzle, all different shapes and sizes making one complete image. Once you have the pieces in place, your job as the photographer is to get their vibe across in a way that connects with the fan. Glenn was a bit shorter, so I brought him closer to the camera and shot him at a lower angle, making him appear taller and more dominant than the others. Without talking to him about any of this, I got it—I got him.

As the shoot progressed, I wanted to get a bit more out of the band, but things soon took a turn into more uncomfortable territory. I asked Glenn to pull his head forward and toward me. It was like talking to a brick wall; he wouldn’t budge. The other guys followed his lead and began to be uncooperative as well. I proceeded to do what I would usually do, go up to the band members and physically move them, adjusting a shoulder here, a head there. But when I got to Glenn, he just said, “Don’t touch me. Just take the photos.” I finished up the roll of film and said, “Okay, we’re done.” To my surprise, Glenn decided he wanted to do one more setup. I never expected what happened next — the whole band came out with their shirts off.

The next day, I followed up with the art director. He asked me, “What did you do to piss off Glenn? He loves your photos, but he never wants to shoot with you again.” I explained that I had moved the guys around a bit and that Glenn had snapped at me. He told me, “You never should have touched him.” I was dumbfounded. The photographs came out amazing and were used in the debut album packaging of DANZIG.

Billy Squier said that you were “aggressive” but not in a “negative way”. What did he mean by that?
I believe you should push it as far as you can. If you’re doing a photoshoot for an artist, especially if they’re paying you to create an image for them to use for their album cover or promo, it’s up to you to get it out of them. If you don’t push it, if you’re not aggressive and trying to pull something out of them maybe even they didn’t even know they had in them, you’re not doing your job. So I do push it to the limit.

What do you remember about Eddie Van Halen?
Onstage and offstage he seemed like the same person. He was always smiling. If he wanted to do something he would be smiling, and if he didn’t want to do something he would still smile and do it. He was one of those guys that made you feel really comfortable. He knew you were there for a reason and he let you do what you needed to do. When I went back into the dressing room to take some photos he would let me be a fly on the wall. I would just leave him be. We had a mutual respectful relationship over the decade. 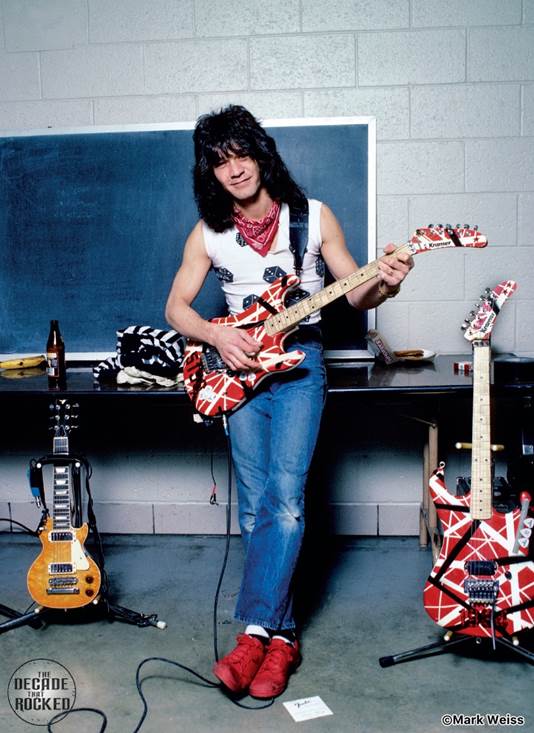 Which rock star/group do you wish you’d shot and didn’t?
The three J’s: Jimi, Janis and Jim.

Will there ever be decades like the 70s & 80s for rock and roll again?
I feel 2020 is going to spawn some new fresh, young rock ‘n’ roll. The pandemic has been so awful and has affected so many lives. But a strength will arise from it, and I feel there will be a group of guys or girls that will tell their stories through their music, and I believe it will be rock-driven. It only takes one band to start a rock scene.