Depeche Mode is an art band that became the favorite of teenyboppers and other moody people everywhere. Where did they go right?

This article originally appeared in the August 1988 issue of SPIN.

After seeing Depeche Mode at the Rose Bowl, hairdressers at Sal’s Hair Magic on Hollywood Boulevard decided that they were four wimps who don’t even know how to throw a football.

Busboys at the International House of Pancakes on Route 28 thought Depeche Mode was French for “hurry-up fashion” or “fast forward.”

Check-out clerks at the A&P in Plainview spent their coffee breaks feeling moody and listening to live bootleg tapes of Depeche Mode.

Doctors at the Mayo Clinic found that Depeche Mode attracted hordes of young girls. Actually, only the front rows were young girls, but even so, young girls are great. They were the first to be hip to Elvis, the Beatles, the Stones, and all the other legends.

Inmates on tier three at the Upstate Correctional Facility fail to comprehend why Depeche Mode, although they aren’t a charted act and don’t end up in the Top Ten, nevertheless play the same halls as Fleetwood Mac, who sell five million albums.

Down at the crematorium outside Boca Raton, Florida, they say Depeche Mode is not a real band because they don’t have a drummer, don’t have a guitar player; they use electronics and tapes.

Bicycle messengers from Atomic Couriers put Depeche Mode down for being a pop band. 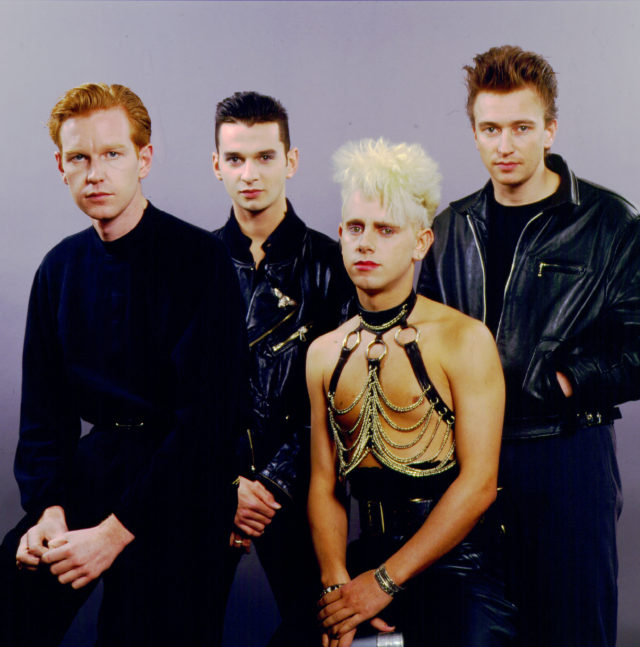 DEPECHE MODE: One of our aims is to bring credibility back into pop. In England, there is no difference between rock and pop, but in America there is. In America, pop is like a dirty word. So many people are anti-Top 40, while in Britain you get in the Top 30, it’s not a bad thing. You can be in the Top Five and still be good, still keep your fans. The problem with pop bands is often they’re not appreciated until maybe ten years later. Gary Glitter, T. Rex, and glam bands who were very throwaway in the early Seventies are real hip now, whereas rock bands like U2 tend to be accepted at the time.

In a Hotel Overlooking a Park

DAVID GAHAN (lead singer): I don’t really have heroes. I’ve got bands I admire, a lot of bands from the Sixties, like the Doors and the Rolling Stones, but only particular areas of the Stones. Beggar’s Banquet, for instance, is one of my all time favorite albums. I definitely would rather have been in the Stones than in the Beatles. My favorite photographs are old pictures of the Stones from the Sixties. I got a framed photograph at home of Keith Richards, where he looks like he’s been to hell and back again. I like the film Gimme Shelter, where Brian Jones looks totally fucked up and beyond help, for the same reasons.

They don’t make films like that today. When you see rock videos now, it’s all glam. This is the concert and this is it. All these bands have all this power and all this money to spend on things, but you can only buy so many cars and yachts. What happened to the heart and soul? It’s more like models on the catwalk.

If there were two of you, which other band would you choose to be in?
New Order, the Smiths, maybe the Cure. Possibly none of us would ever mention it in interviews, but I think there are similar areas in all three bands to Depeche Mode, especially in New Order. I often read interviews with New Order where Hoky talks about being one of the last surviving punk bands. That’s something I like.

The same with the Cure. Although they’re a major act, now that they’re on a major label, they still have a punky image in the way that they don’t toe the line.

How do you not toe the line?
Our stage performance is very different. We use all synthesizers and tapes and stuff, and some people can’t handle that. They want to see a drummer and they want to see a guitarist running up and down a stage, so it gets up people’s noses. I don’t quite understand that, because in the end, the song’s the most important thing. If you haven’t got a song, it doesn’t matter anyway, and songs are the strength in Depeche Mode.

Over a Cup of Coffee

DAVID: I like to feel tense and unrelaxed. I don’t like to sleep before a gig or eat before a gig. I want to feel on edge and I want the audience to feel that way as well.

What about after a gig?
When it comes to a close situation in a small room, I often feel very claustrophobic. I don’t like that kind of intensity. Sometimes you get to the boiling point where you actually think you can kill someone, just to release some energy or to find out what it feels like. I don’t know if I could actually do it if it came to it, but I’m not scared of being killed myself.

How close have you come to death?
A few years ago, I was driving to the studio in my first car, a black ’83 Ford Escort. I was going about 80 mph and somebody pulled out in front of me. I slammed on the brakes and when you slam on the brakes at that speed, I found out, you just don’t stop, the wheel takes over and suddenly the whole car as spinning around and I couldn’t see anything. The next thing I remember, there was all this glass shattering and I smashed through the windscreen. I also remember I had the Doors playing really loud.

What song was it?
I think it was “L.A. Woman.” When the car finally stopped, the tape was still going and the car was completely totaled. I remember the music was really loud still. I tried to get out of the car, but I couldn’t get out because the doors were caved in. The car was smoking. I could actually see liquid pouring across the road and that there were at least three other cars involved.

Finally I climbed out of the car and I immediately went down on the grass because I couldn’t move my knees, they were both smashed, and I immediately burst out crying. I wasn’t so much in pain as in shock. I remember looking in the road and seeing this guy from another car, who had half his leg torn off, rolling around in the road, calling out for help. All I could do was cry. 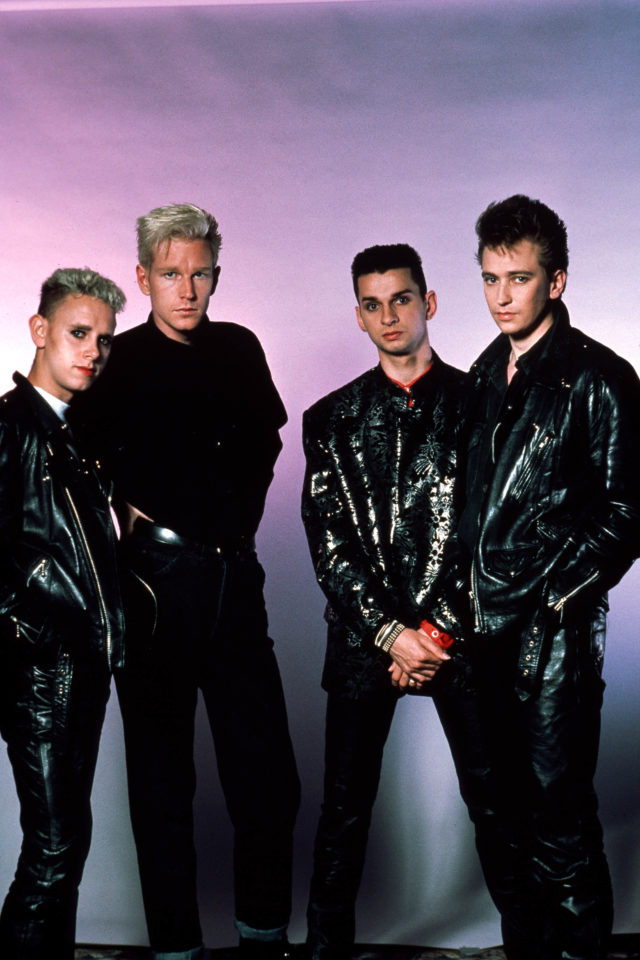 Overheard in an Elevator

Why does Depeche Mode attract so many young girls?
ANDREW FLETCHER (synthesizers): That’s totally untrue. In Europe, I’d say 80 percent of our audience is guys, and over here we do get some young girls, and gays, for some reason, and normal blokes.

ALAN WILDER (synthesizers): But when they cheer, it does sound like a lot of girls, probably because it’s mainly the girls screaming.

Concert Review in a Local Newspaper

“If a band can have zero stage presence, Depeche Mode has it. At one point the bottom bleated, an electronic glockenspiel sweetened the top, but no one in the band was touching an instrument.”

In a Park, Under a Tree

ALAN: A lot of music is done through samplings. Sampling is where you record a sound, just like you would on a tape recorder, except instead of tape, you use digital information.

You take a tiny bit of a sound, throw the rest out, and by varying the pitch—slowing it down or speeding it up—it become a totally different sound from what it was originally. Once that sound is on the keyboard, once it’s captured there, you press a key and it’s like pressing the start button on a tape recorder or an engine.

You can take the most beautiful, purest voice sound in the world and fool around with it digitally until it’s this most monstrous, evil sound, or you can take a moose fart and make it beautiful.

Can you order out for sounds like you can a sandwich?
ALAN: Practically. Before starting a record project, we will spend maybe four or five days separately just sampling and building up a massive library that we’ll resort to when we’re searching for a sound for a particular melody part. And if we think the sounds we already got aren’t suitable, we’ll carry on looking longer, sampling other stuff.

Where do you usually go?
ALAN: To the local scrapyard.

MARTIN: One of the most interesting places for sampling is your standard kitchen. Plates, glasses can openers, pots and pans—crockery and cutlery—make good percussion sounds.

ALAN: The thing is to try to think laterally. If we used a Hoover, it wouldn’t be the noise of the Hoover Hoovering you’d hear; it would be the sound you get when you hit the end of the blow pipe—a great bass sound.

Have you used that bass on any of your songs?
ALAN: On every track of every record.

What other “instrument” have you used?
ALAN: The “drum” sound on “Strip” is actually a motorcycle idling, slowed down to a point where it sounds like a huge tractor or generator.

Did you ever go somewhere to sample and find another band sampling there?
ANDREW: It’s not something you see really. You figure you’d see a million of these hip hop people out in the streets, but a lot of them aren’t adventurous. We sample from other sources as well, like records, and we still use a lot of synthesizers, and combination sounds, like a car door with a skid.

ALAN: We’ve sampled a Pygmy doing his wail, but we’ve turned that into something that sounds nothing like a Pygmy. We also used synthesizers and synthesizers means synthetic. It reproduces sound; it’s not actual sound. 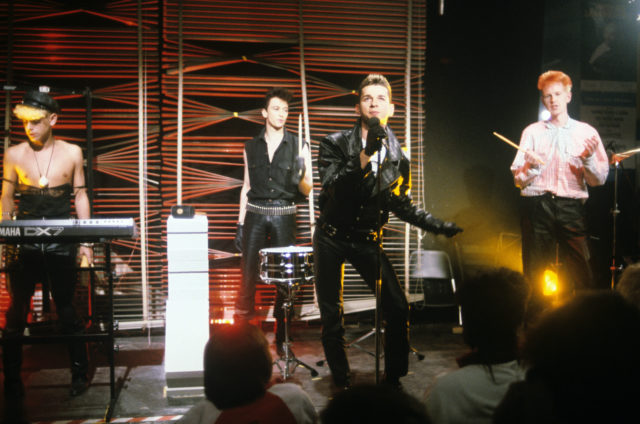 Do you wear synthetics?
ALAN: No, I hate nylon and polyester.

And synthetic foods?
MARTIN: I take ginseng but not vitamins.

ALAN: I take lots of them.

In a Back Room

MARTIN: Alan, Andy, and I generally like to lurk in the shadows. I hate it when I have to take over the front man role when it’s live, even for a couple of songs. We’re sort of back room boys.

Which shadows do you like lurking in the most?
ALAN: It’s not so much the shadow itself as much as where it is and the space around it. A tree in a desert is going to cast a much stronger shadow as opposed to a tree n a park.

ALAN: There’s the bunker, which is immediately a back room, and there’d be another layer of slightly more secretive rooms.

In a Shelter from a Storm

What don’t you get enough of?
ANDREW: Sunlight and air.

And what do you get too much of?
ALAN: Recognition and money—we could get by with less money.

Back at the Hotel

Which band has the reputation for being the toughest?
DAVID: You mean fighting-wise? There’s certain bands you don’t mess with and Killing Joke is certainly one.

When the trip was over I ended up hanging onto the door. Then the guy got out and he was big and fat and started getting real excited. I thought that was it for me. But then his trousers fell down—he didn’t have a belt—and he couldn’t run or do anything. He just fell over.