In 16 years, Cabaret Voltaire have gone from paranoid art punks to the band of choice in yuppie clothing boutiques. The good news is they're still paranoid.

This article originally appeared in the February 1988 issue of SPIN.

The white uniform, the flaking red lips, the spectral white support hose approach. Time to make a decision about the future. At center ice in a midtown Manhattan coffee shop, Stephen Mallinder and Richard Kirk of Cabaret Voltaire have but seconds to resolve a dilemma of import to new music past, present, and future: What is the appropriate noon-time repast for a visiting English band?

“Are you serving breakfast?” asks Mallinder. “You can’t get beer in this place, can you?” asks Kirk.

The flaking red lips answer no to each. The hose hold their ground. 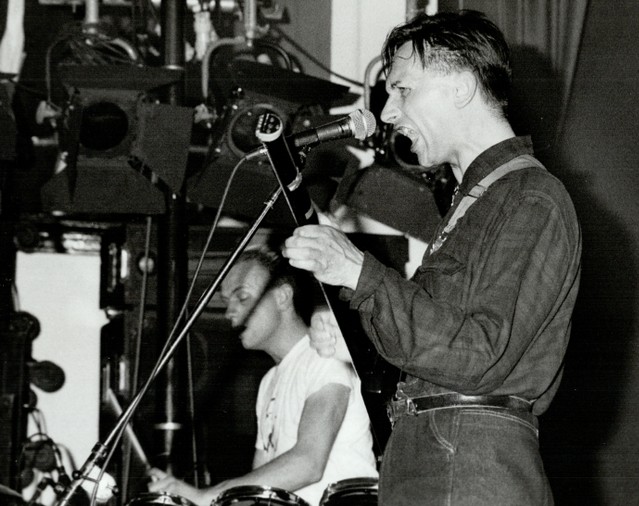 However it handles the critical beer/breakfast dialectic, new music in the coming years will no doubt address the conditions under which rock ‘n’ roll is made and consumed. In the eighties so far, the most radical developments in pop music have been in marketing: videos that advertise songs, commercials that look and sound like videos, corporate sponsorship, ancillary products merchandizing, compact disc revisionism, and film sound track tie-ins. At one point in 1987, the top three singles on the English charts came from TV commercials.

As Danny Socolof, president of MEGA, a New York company that pairs rock stars with corporate sponsors, told SPIN, “In the sixties, rock was a scary proposition in myst corporate boardrooms. It became the antithesis of materialism and the corporate American way. But in the eighties, that no longer holds true.” What was once shocking now sells blue jeans.

The challenge, then, is for music to become shocking once again, to reclaim itself from the marketing industry. One alternative is complete withdrawal, a silencing of one’s own voice. A second, more practical option is to turn the tables: to expose and manipulate the media in the same way the media manipulate rock ‘n’ roll—to make music about the loudspeaker. Any musician that throws a light on the business of selling cannot help but be shocking.

This process is already going on. Hip hop, though scratching, takes back from radio the right to control the contexts of music, and from record companies the right to control music as property. In northern California, a group called Negativland has constructed an entire album almost wholly out of found sounds and voices. Their Escape From Noise (SST) removes words from context and exploits voices of commerce and authority for the band’s own often ironic purposes.

For example, one song intercuts a comforting pitch for a suburban community with what sounds like an NRA advocacy speech, calling into question the neutrality and “natural” reassurances of the first voice. In London, producer Adrian Sherwood cuts up pieces of news broadcasts and drops them into the mixes of records by Mark Stewart, Fats Comet, Tackhead, Gary Clail, and now Cabaret Voltaire. Elsewhere, groups like Coil, Skinny Puppy, Ministry, and a host of others are using tape and digital technology to give voice to a new paranoia.

But anyone engaged in this kind of tape finagling has to acknowledge a debt to Cabaret Voltaire. As teenagers in the northern England steel-mining town of Sheffield, Mallinder and Kirk attended soccer matches and dressed as mods to go to reggae and soul clubs. But 1972, still in their teens, they were making music together using a couple of tape recorders. Sixteen years later, they’re finally enjoying their first album release on a U.S. major label with Code, produced by Sherwood.

Though Code relies more on beat and less on fear than their early records, it begins with a telling monologue, lifted from a documentary about American troops preparing to occupy Germany. A treated voice says, over the crunch of a drum machine, “You are in an enemy country. Be alert. Be suspicious of everyone. Take no chances. They’ve read no free speech, read no free press. They were brought up on straight propaganda. They have been trained to hate and destroy. Don’t argue.” The song ends with a gunshot and a scream.

How did you come to use tapes in the way you do?

RICHARD KIRK: I always saw it as giving the music a cinematic feel, another dimension, where you could be somewhere with a piece of music on, and you’ve got a conversation going at the same time, that kind of idea, where you’re not just giving people a piece of music, you’re trying to create some kind of atmosphere, some kind of mood.

How did you pick the name Cabaret Voltaire?

STEPHEN MALLINDER: It came from the original Cabaret Voltaire in Zurich [where the founders of Dada gathered during the First World War]. We were just interested in it, partly because we had art inclinations, but also, their attitude was very funny, because it was so antiestablishment, but also very humorous at the same time. The Dadaists were the ultimate pranksters, really.

RICHARD KIRK: Monty Python basically stole most of their ideas from Bruñuel’s films.

STEPHEN MALLINDER: Arthur Craven, the American Dadaist, was hilarious. Claimed he was a heavyweight boxer, so he fought Jack Dempsey a proper fight, got knocked out in about 30 seconds.

RICHARD KIRK: When you’re a kid of like 16 or 17, a very impressionable age, you find out about all that stuff, and it’s fascinating. It was also, keeping with the Dada spirit, we stole the name from them. I think they would have liked to see that.

Were you more innocent about how subversive a band could be back then?

That’s why when people want us to be more extreme, one, we’ve done it, and two, there isn’t anything that shocks anymore. We work with the taboo subjects of sex and violence, and it doesn’t particularly work anymore. It seems gratuitous to me, it seems pointless. Not pointless, but I think the logistics of it are that you have to work wit ha degree of ambiguity. To use it as an end in itself I don’t think works. 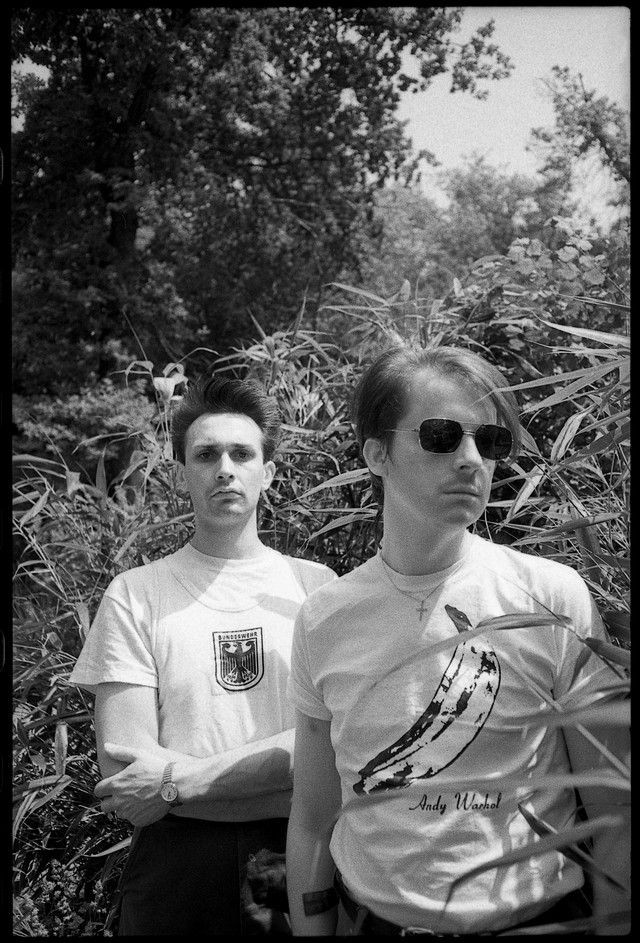 Is using a tape, turning a voice of authority into something else, a political act?

RICHARD KIRK: I think it’s more an act of mischief, a joke, in some respect, but it’s black comedy. I usually pitch those things down to make them seem even more ominous, deeper in tone.

STEPHEN MALLINDER: It is tongue in cheek.

RICHARD KIRK: But considering the political climate in England and the way things are going, the totalitarian thing is a lot nearer than it used to be, in terms of people’s freedom. We’re not completely paranoid.

RICHARD KIRK: But I’d rather hear something like that than “My baby, she don’t love me no more.”

Although at one time a lyric like that made a very powerful political statement.

RICHARD KIRK: I think that’s when rock ‘n’ roll was truly more powerful, because it was definitely a challenge, something that people’s parents basically hated, didn’t want in the house. There’s not a lot of things like that at the time.

STEPHEN MALLINDER: Rock ‘n’ roll since its inception has always been more sexually subversive than politically subversive. The figures that have been the icons have been Elvis Presley, Mick Jagger, Johnny Rotten, and now in her own way perhaps Madonna, but they’re sexually subversives, it’s closely linked to sex rather than political subversion. I think the establishment has always seen the sexual threat, the moral threat, greater. The Moral Majority are reacting to Twisted Sister’s notion of morality rather than their politics.

STEPHEN MALLINDER: I think it’s still rebellious in its own way. The rebellious aspects have always been subculture, they’ve never been the mainstream. The punk thing was the subculture. I think black dance music is the subculture now. Because it’s more of a black revolution, people don’t really latch on to it. Also, because it’s black, it’s not really as media manipulative as punk was.

RICHARD KIRK: I find that hip hop and house are the only music that’s trying to kick out in some way. But I might be completely wrong. It’s probably just as money oriented as anything else. But in terms of the way it sounds, when I listen to a group like Public Enemy, like the scratching, or the way they present it.

STEPHEN MALLINDER: It’s the same elements as what we were using, but it’s more controlled.

RICHARD KIRK: A lot of the ideas that we used with sound, a lot of the techniques, are what Burroughs has done with writing, the cut-ups. He even did all that stuff with tape recorders in the fifties, anyway.

What is your interest in codes?

We chose the name because it seemed, one, everyday jargon, and it also seemed something that was very relevant, on the technical side, to the recording and everything that’s around us, really. It just seemed an obvious word, almost. People tend not to notice that it’s like Modernspeak, really, the whole notion of code. It’s quite ambiguous. First it was like a technical notion, codes on tape, computer codes, telephone code, personal code, zip code.

The track “code” came from the French computer sex thing. It’s not actually sex, but the big fad in France now is talking to people by computer, the whole home-computer relationship thing. And it’s incredible, because all these people are talking to each other, and nobody’s really sure of anybody’s gender. That was another connotation of it. That was like the whole notion of personal codes, personal number indications, but I still found it fascinating that nobody knew what anybody was, but also because they give themselves fictitious names which are very fantasy names, like real vampirella names, dominatrix-style names.

And of the telephone companies started the ball rolling with the idea of it, and the users turned it into this hybrid form. I don’t think it was designed for that use. Now they advertise it on subways, and they’re playing up the sexual angle of it. It’s a total con. People do it, but it’s totally fabricated to get people to ring up. But they’ve actually lathed onto something that there must be some need for, in the sense of communication, in the sense of people’s weird isolation, where you have to ring up things like that. And there must be some sort of adrenaline rush from the anonymity. It just seemed to fit in terms of what we do.

Are you trying to be more accessible now?
RICHARD KIRK: The music is viewed as entertainment more than ever before. In the past, I don’t think you could say that about it.

STEPHEN MALLINDER: You try to draw people in and entertain them, as well as an education thing, giving them things juxtaposed with that that they wouldn’t ordinarily see.

The things that have made the most impact are the ones that have actually reached out to people, rather than things that are in people’s bedrooms. You’ve gotta work more with the mainstream thing in order to attack. The irony is, we get up more people’s noses now than we ever did. That’s the irony of accessing yourself to more people, and the way you sell yourself and market yourself. We actually go against the grain now more than in ’78.