Acclaimed U.K. artist slowthai (real name: Tyron Frampton) is known primarily as a rapper, but on his third album, UGLY, the admitted Nirvana and Radiohead fan veers farther into rock territory than ever before. The 12-track effort is out March 3 through Method Records/Interscope, and is led by the pounding, intense single “Selfish,” which is out now (Jan. 25).

slowthai revealed details of the new music during a livestream set inside a room with floor-to-ceiling two-way mirrors, where he will spend an unknown number of hours alone. The stream can be viewed on YouTube and TikTok.

“This album was me trying to emulate the spirit of the brotherhood ethos that bands have,” says slowthai of UGLY, which was produced by Dan Carey (Wet Leg, Black Midi) and features Fontaines D.C. on the title track, plus contributions from Jockstrap’s Taylor Skye and Beabadoobee guitarist Jacob Bugden. “Music is about the feeling and emotion that goes into it. Like an artist making a painting, it’s the expression of that moment in time. I really felt like I didn’t want to rap, whereas before, rap was the only way I could express myself with the tools I had. Now that I have more freedom to create and do more, why wouldn’t we change it up?”

The album cover is a close-up photo of the left side of slowthai’s face, with the title tattooed under his eye. “I have UGLY tattooed on my face because it’s a reminder to love myself, rather than put myself down constantly or feel the impression people have of me should determine who I am as a person,” he says. “At the end of the day, the art I make is for myself, and the music I make is for myself. If I enjoy it, then who gives a fuck? So, the way I should live my life should be without any expectations of anyone else. I think it’s something that we all need to hear because everyone needs a smile, and everyone needs a bit of joy and you need to look in yourself to really feel it, because no one else can give you the real feeling.” 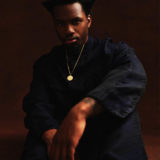 UGLY is the follow-up to 2021’s Tyron, which hit No. 1 on the U.K. Albums Chart. slowthai is gearing up for several shows next month as part of Australia’s Laneway Festival, which will also feature Haim, Phoebe Bridgers, Finneas, Fontaines D.C., and Fred Again. He will play European festivals this summer, as well as open for Blur at the Damon Albarn-led band’s massive comeback show on July 8 at London’s Wembley Stadium.