When you’ve been in Radiohead together for nearly 40 years, what’s left for two childhood buddies to do but travel the world with a nasty jazz drummer, flexing chops on near half the instruments in western music—bass, piano, pedal organ, harp, vocoder, effects units, synths, sequencers, plus string-bowed, finger-picked and fist-bashed guitar—often handling two at once, playing high-dynamic songs with boggling time signatures?

Play the Montreux Jazz Festival, the stage Miles commanded for a decade, that’s what!

For those in a cave, these are The Smile: Thom Yorke, Jonny Greenwood, and Tom Skinner, the ridiculously fluid Sons of Kemet drummer who may or not be Artificial Intelligence. Their recently released 2022 Montreux performance album finds the three exploring the colorful, near-prog realm of their debut LP A Light for Attracting Attention in real-time, testing their mettle without Nigel Godrich production.

Our verdict? This is no mere studio project. The Smile are an actual, organic live band. 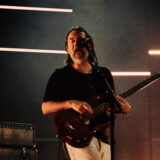 “Pana-vision” is a fantastically tense live opener, just our Thom and a slow piano line that pinwheels like Hitchock’s Vertigo poster. When the others join, soft and sparing, the feels go alternatingly creepy then warm, over and over, transformed by well-defined chording. Throughout, the piano phrase continues to spin with no clear start or end point, thanks to disorienting, math-geek time signatures. A loop pedal would be an acceptable live hack, as performing in and singing separate signatures is no small feat. But these people paid admission, so Thom juggles time for four minutes straight.

Live, it’s confirmed: Jonny doesn’t touch his signature Telecaster, and instead, banks it all on a gold Les Paul. “Thin Thing” shows them to be great conspirators, as twice, without warning, nonchalant digital-delay-pluck verses erupt into leonine death-Rhumba bridges, with a tone so violent and unexpected it’s both terrifying and fascinating—the type of otherworldly roar that makes aspiring Sun Ra fans hit stop.

Onstage, Greenwood brutalizes the poor Gibson with pure Old Testament wrath—the kind of ruthless, full-arm strokes that landed him in an arm brace during early ’90s shows—while Thom’s bass bobs in the fire, much punchier and more present than in-studio. Skinner, who could be tempted to go pure Grohl, abides the blueprint and stays cool.

The tension and tug between off-tempo drums and guitar in “The Opposite” demands a head-nod like the best 90s hip-hop. The simple funk blooms in the breaks, where Jonny employs delay to play notes he’s not exactly “playing”, firing obtuse riffs like simplified late-period Coltrane, until out comes raga, the heritage music of India he explored with The Rajasthan Express on 2015’s Junan LP.

Raga is a music without chords, or any concept of minor and major, only traditional intervals embellished over wild rhythms, which is to say, the long-lost foreign cousin of Greenwood’s thrash-about Radiohead soloing. As “The Opposite” whirls on we bear witness to some of the latter…the long-awaited return of the OK Computer guitar spaz-out!

Tom with no “h” plays chaperone and anchors the dervish, and as brooding synths drift (one of the few automated elements of The Smile’s live show), Yorke continues to prove an actual bassist—a jazz bassist even—throwing deft runs and brainy licks, rather than simply comp drums.

Skinner mans the synth under vague Thom falsettos, until here it comes again, that hands-in-the-pockets-and-kicking-a-can guitar, the melancholy, longing feel of late-period Radiohead. For a cheer-up, Jonny enters the Coltrane bonus round, playing piano and a harp simultaneously (see his fave Alice album, 1968’s A Monastic Trio), twinkling like a human wind chime. Drums swing and stutter in, Thom goes sultry, then moody, and the harp-sparkles wash him to the ether.

FREE IN THE KNOWLEDGE

Mournful, fragile and pretty, this one restates the obvious: slowly morphing background synths are super cool at any live show, especially those that grow and contort behind Thom and Jonny during “Free in the Knowledge”. They’re also a great tool for devolving a song instead of simply ending it, and what rocker’s Jazzfest visit would be complete without a noise storm? As such, a “Daydream Nation” era Sonic Youth sound squall blows this number out, conducted by Jonny with a bass and stringed bow, as Skinner free-drums and Thom goes aggro-shoegaze.

Both long-professed fans of Jamaican dub music, Jonny and Thom take it for a test stroll on “The Smoke”, a well-placed breather in the show that sure smells like a celebration of cannabis (“wakes me from my sleep, the sweet smoke”?) Then again, that verse about self-immolation, á la the monk the Rage cover? Not as irie.

The spare, wafting instrumental stretches and tripped-out echo vocals, both dub stalwarts, allow for great improv live, and as setlist strategies go, the sedated Fela Kuti vibes were a great way to disarm tens of thousands of people for the post-punk pummel of the next song.

YOU WILL NEVER WORK IN TELEVISION AGAIN

“You Will Never Work in Television in Again” is only Radiohead playing The Fall with less sneer and audible vocals. Which is completely awesome! The band’s debut single feels celebratory and a bit less abrasive live, still simple and tight within the pastel chaos of saxophonist Robert Stillman, opener for many of The Fa–, sorry, meant The Smile’s, North American tour dates. “You Will Never Work…” is as close as these Montessori lads get to straight rock, and it’s great junk food when discerning listeners need simplicity.

THE UPS… AND DOWNS

In the end, the flaws of The Smile at Montreux… mostly involve what isn’t on the album. Absolute cruiser “We Don’t Know What Tomorrow Brings,” performed earlier that night, is fired-up modern-day Joy Division. Who doesn’t need that? And at a type of festival made for improv, just a bit more jamming would be nice. But to be fair, who does handstands on a first date?

The album’s biggest letdown, however, involves the exclusion of perhaps the most exciting song of the night, “Bending Hectic.” Yes, Montreaux was the unreleased song’s first live performance (with Yorke confessing he had written the lyrics a half hour prior), all the same, babies are complete when born, and “Bending Hectic” already glows with that certain Radiohead something capable of making you cry. To explain…

Picture this (because you sure can’t hear it): “Bending Hectic” is songbird guitars, teetering and yawning with slow string bends, gentle freeform drum patter and innocent, wandering bass, as Yorke sings about skidding a hairpin turn on an Italian mountainside in a soft-top sports car from the 60s, launching off a sheer cliff in slow motion, accepting fate, and releasing the wheel.

A sad, beautiful section follows, both parts repeat, minutes pass as the tear ducts swell, until a stunning, instant chill-to-nuclear dynamic once witnessed in “Creep” occurs, and like a dead best friend in a dream, out come the pulverizing power-chords Radiohead fans have been pining for since The Bends (….”The Bends”…”Bending Hectic”…hmm.)

The song’s epic conclusion is a melted latter-half of “Pyramid Song” on steroids and edibles, as Thom says screw it and chords the bass, Skinner be-bops like a madman, and Jonny invents My Bloody Hendrix.

Though not on the album, “Bending Hectic” is on The Smile’s official Montreux live video, unfortunately streamed by the band for only two days—but do your heart a favor and endeavor, a bit of Googling and Reddit combing are sure to uncover a live streaming link.

If nothing turns up, perhaps catch them in the new year, as sources say that Thom has acknowledged a 2023 US summer tour.