Chris Farren’s success in 2022 sounds like a fever dream. There’s an evil ghoul that he’s constantly battling against online, the ghoul’s seemingly benign baby, a sentient piece of plastic known as The Cup that may or may not be plotting global domination (which SPIN both interviewed and sent to Coachella earlier this year), more green screen-based promo videos than most bands make in a decade, and it all centers around a primarily instrumental soundtrack for an action-packed spy movie that doesn’t actually exist.

If you’re still following, congratulations. It’s a great day to be a Chris Farren fan.

But in addition to the surprise release of Death Don’t Wait (Original Motion Picture Soundtrack) and the year’s most viral piece of merchandise, the indie pop/punk rocker (and former Fake Problems singer) also saw a year of touring that made Elton John’s latest farewell seem insignificant.

As the U.S. scored its biggest (and only) win of the World Cup over Iran on what felt like every television around Los Angeles, SPIN sat down with Farren at Horse Thief BBQ to talk about his record-breaking year. 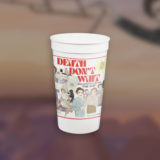 We Sat Down With 2022’s Most Viral Piece of Music Merchandise, Chris Farren’s The Cup

SPIN: In a nutshell, what were some of your favorite moments of 2022?
Chris Farren: Well, obviously putting out Death Don’t Wait and The Cup was really cool. I got to play Wembley Arena, which was a pretty big deal on paper, but I was opening for somebody, so it doesn’t really matter — but it’s still cool to say that I did it. It was just so nice to play a shitload of shows again. I probably played over 70 or 80 shows, which was a good amount after taking a big break. It was just nice to get back to it. I’m almost done making my next record. So those are my big joys from this year.

I think Death Don’t Wait might be the best soundtrack for a movie that doesn’t exist. It’s definitely in the top 10.
I think you’re right.

What was it like to have the freedom to be able to make an album like that? I feel like a lot of people would have that idea shot down by a record label.
My wife is in TV commercial production, so I had her help me make a super professional pitch deck with a proof of concept about the record. In my experience, when you’re pitching a record label an idea like this, which is maybe a little wacky, that’s what works — but this is literally the only time I’ve ever done this, so who knows? Presenting that to Polyvinyl [Record Co.], I asked them “Has anybody ever done this before?” They’re like “Obviously, no. No one has ever done this before.” I think when you do such a hard sell on such an insane idea, they appreciated that I was so enthusiastic about it.

Also, I feel like I pick and choose when I ask for money for stuff. I can make records for pretty cheap, so Polyvinyl has been really great to me. They’ve been really awesome and receptive to my crazy ideas. They see that I have a vision for what is going to happen. I’ve described a lot of my online stuff as “viral proof,” because it’s impossible to go viral intentionally — and my stuff is so convoluted and confusing, but that makes it more special and fun for the people who do get it. It’s very accessible and open to everybody, but you have to either have somebody who’s already into it explain it to you, or you just have to hang around for a week or so, and then you’ll start to understand what’s going on.

Speaking of the convoluted and confusing online world of Chris Farren fans, you’ve obviously had some very viral merch before. With that in mind, how did it feel to see The Cup’s success earlier this year?
It was awesome. I don’t want to say I knew it was going to happen, but I did. I got a little bit of pushback on The Cup from someone on the manufacturing side of things. I don’t want to throw anybody under the bus, but I had to convince them that I was going to sell a lot of these things. But that made it even more important to me, because I was like “You don’t think I’ll fucking sell 100 of these?!” So I went even harder than I probably would have. But they’re really inexpensive to make, and it’s all concept-driven. It’s a promotional item to promote a movie soundtrack for a movie that doesn’t exist, so I was thinking “What’s a movie merch item?” I was thinking of the cups they used to do for Godzilla and movies like that, and I think a lot of people totally understood that. Plus, it’s five bucks. Just fucking get it.

And you obviously had some huge tours this year, including with both Brian Fallon and the Gaslight Anthem. Rumor is that they reunited just to tour with you.
Yeah, it was all for me. Just to bring me around.

What was it like to have them as the closing support for your shows?
It was so big for them. I bet it was huge for them. They loved it. It was nice that I gave their fans that opportunity to see their favorite band again. I brought them all back together and carted them around. I even let them headline because they’re older than me and I respect my elders.

Obviously it was a huge deal for them, but were those tours meaningful for you?
Oh, it was amazing. I’ve known Brian and everybody else in the Gaslight Anthem for 15 fucking years or something. We did a lot of touring together in basements and shit with my old band, Fake Problems. It’s an amazing moment to watch your friends that you’ve known for so long play these literally gigantic shows, knowing that they’ve always been the same guys. It’s pretty cliche, but they’re just good people.

Aside from those tours, you also hit some headlining shows and put on what I’ve heard was a perfect set at festivals like The Fest.
“The best set of The Fest” is what people called it, I think.

After being away for a couple of years, how did it feel to bring your live shows back to Chris Farren fans?
It’s the best. It’s so much fun. I know a lot of musicians who don’t like touring for whatever legitimate reasons or it’s just not people’s vibe, but I love touring so much. I want to do as much of it as possible for as long as possible. I don’t see myself stopping until I physically cannot do it. It’s my favorite thing in the world to do. I hate writing songs, but I have to write songs so I can tour. The nature of my show has all these projections and stuff that make it really fun. It’s just been great to get back to it and pick up where I left off before the pandemic and shit. I can finally resume evolving as a performer, and I already have a lot of plans for the way my show is going to be different next year. I’ve definitely grown a little bit bored of the way I’ve been doing it, so I’m adding some elements that I’m excited about.

You can only play so many perfect sets in a row.
Exactly. That’s right. Eventually, it’s just like “Who cares? Another perfect set? So what?” I need to up the ante for next year.

Speaking of next year, what are some of your plans for 2023?
I’m putting a “normal” record out. By “normal,” I mean it’s not a Christmas album [like 2014’s Like A Gift From God or Whatever] and it’s not a fake soundtrack. It’s like a “my precious feelings” type of record. The title of the record is in the liner notes of Death Don’t Wait. It says “Chris Farren will return in…” and then it says the name of the record. That’s the most ahead-of-time planning I’ve ever done. I’m actually surprised I was able to stick to it.

Marvel should really call you for help on that.
Yeah, I’m trying to be the Kevin Feige of indie pop and expand the Chris Farren Cinematic Universe.