A fifth person has accused Arcade Fire frontman Win Butler of “emotionally manipulative behavior,” following a series of similar allegations leveled at him in an August report by Pitchfork. A representative for Butler declined to comment on the new development.

Pitchfork gave the new accuser the pseudonym “Sabina,” and said her on-and-off, three-year relationship with Butler began in the summer of 2015 when she was 22 and working as a waitress in a Montreal cafe. She didn’t recognize Butler at first but a co-worker told her who he was, and they struck up a conversation that led to frequent texting and, eventually, in-person meetings. Sabina says she and Butler had sex for the first time that fall at his Montreal studio space.

“In general, it was an abusive dynamic,” she said. “It was really aggressive and I felt like I just had to do what he said. I was not really comfortable with some of the things he was asking me to do, but doing them anyway. And that is ultimately dehumanizing.”

Pitchfork reported that Sabina “didn’t overtly say no or otherwise try to stop him” but that she considers the encounters to have been not clearly consensual. “I think he genuinely wouldn’t know if something was consensual or not,” she said of Butler. 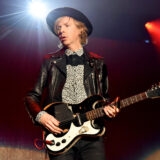 As their interactions progressed, Sabina said Butler sent her unprompted explicit photographs of himself and continually asked her to do the same. However, she continued spending time with him until 2018, only at which point she apparently decided she “didn’t feel any kind of connection to him.”

Butler, who has been married to Arcade Fire bandmate Régine Chassagne since 2003, admitted to the “consensual” affairs brought to light in the original Pitchfork article but insisted, “I have never touched a woman against her will, and any implication that I have is simply false. I vehemently deny any suggestion that I forced myself on a woman or demanded sexual favors. That simply, and unequivocally, never happened.”

Chassigne stood by him in a statement of her own, writing, “I know what is in his heart, and I know he has never, and would never, touch a woman without her consent and I am certain he never did. He has lost his way and he has found his way back. I love him and love the life we have created together.”

Shortly after the first wave of allegations, Feist dropped off of Arcade Fire’s fall European tour as a support act, and Beck did the same for the North American portion. The group’s latest release, WE, is up for best alternative album at the upcoming Grammy awards.